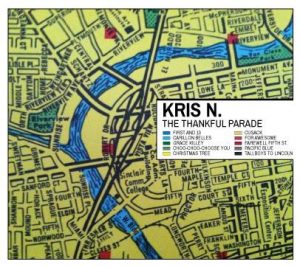 It is not uncommon for singer/songwriters to hold the lion’s share of stock in sadness; especially when divorce is involved. Anyone who has heard Cursive’s celebrated Domestica album knows how powerful musical communications about domestic chaos can be.
When singer/songwriter Kris N. experienced his divorce it would have been natural for him to deliver a sad, chaotic tale of the American dream becoming a domestic nightmare. But something happened to rewrite the script. He met future love and musical collaborator Lindsey Keene (formerly of Vanity Theft), who lifted the “divorce” albatross from the neck of the father of three. While his forthcoming album, Thankful Parade, isn’t a tale of domestic heartache or bliss, it is a very real testament to the comfort found when two friends can see the light at the end of the tunnel.
They aren’t Mates of State by a long shot. Nor are they Thurston and Kim (thank goodness). But, what Kris and Lindsey have found is a middle ground between Nuclear family and Brady Bunch living and being the face of indie rock parenthood in 2013. And their musical response to domestic life is filled with love, humor, and sounds amazing.  Kris N. releases Thankful Parade, recorded and engineered by Micah Carli (of Hawthorne Heights) on November 1 via Poptek Records.
Ghettoblaster recently caught up with Kris to discuss the record.  This is what he said.
When did you begin writing the material for your most recent album?
Most of the songs were written last fall.  From the beginning I knew what I was going for and I could hear it. I wrote most of the songs within a couple weeks of each other. It took the rest of the band to really complete the sound I had in my head.  “Tallboys to Lincoln” was added way later and “Farewell 5th Street” is probably three years old now.
What was the most difficult song to take from the initial writing stage through recording and mixing?  Why was it so troublesome?
I think they all had their challenges initially because we wrote and played all of them on acoustic.  Before going in the studio I knew I wanted an electric more rock feel to some of the songs, and was again just trying to match the sound I had imagined
all along.  If I had to pick one I would say “Cusack.”’  We never practiced the vocal parts the way we ended up recording them. Lindsey and I actually made that up on the drive to the studio.
Which of the songs on the record is most different from your original concept for the song?
I would say that “Choo Choo Choose You” took on a mood all its own from the original concept. Johnny’s keys are the driving force and focal point to that song. Originally it was way more guitar driven.
Did you have any guest musicians play or sing on the record?
Yes, our good friend and labelmate, Chris Palassis (L’Albatros), came in and helped out with the gang vocals.
Who produced the record?  What input did that person have that changed the face of the record?
Micah Carli (Hawthorne Heights) engineered and produced the record and was truly amazing to work with. He had a ton of input and the tones on the record are entirely him. I knew what direction I wanted to go and he knew how to get there. He pushed us a lot and really got the best out of us. We were on a tight time frame and recorded the entire 10 songs in two days. I really can’t say enough nice things about Micah and his approach.
Is there an overarching concept behind your new album that ties the record together?
I’d say that I set out to make a record that was positive and made people feel good when they heard it. My records in the past have been on the dark side with its subject manner. I wanted to write songs that made me happy to play and reminded me of the things in my life I am thankful for every day.
Have you begun playing these songs live and which songs have elicited the strongest reaction from your fans?
We have begun playing the songs live and have gotten a very strong response thus far. Many people who have supported me over the years had never seen me plug in the electric and front a real rock and roll band. I think “Christmas Tree” has gotten a great response in the live setting. It is a real attention grabbing song and a very fun song to perform.
(The Thankful Parade album release is November 1, 2013, at Canal Street Tavern, Dayton, OH.  Support from: The 1984 Draft, Hospital Garden (Arts Vs. Entertainment), Motel Beds (Misra Records)
Visit him here:
https://www.facebook.com/ krisnpoptek
http://kris-n.com
http://poptek.com
http://kris-n.bandcamp.com
http://myspace.com/krisnmusic
http://twitter.com/krisnpoptek)