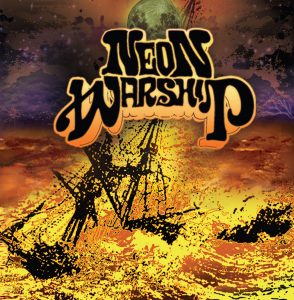 When Ferret Music recording artists’ Twelve Tribes called it a day in 2007, Dayton metal fans mourned the loss of an internationally recognized powerhouse act with a decade and a half of touring, MTV appearances and a significant back catalogue of critically-acclaimed albums under their belts. To the delight of local headbangers, it wasn’t long before vocalist and multi-instrumentalist Kevin Schindel began pulverizing eardrums with Mouth of the Architect (Translation Loss) and channeling Norwegian black metal maestros with Bringers of Disease (Translation Loss).
But, metal fans in some circles held their breath that he’d someday reunite with Twelve Tribes bandmates in some capacity for a project. Schindel, former Twelve Tribes bassist Matt Tackett, and Tackett’s bandmate Jay Bird from short-lived Goodlife Records band Waking Kills The Dream, emerged in 2011 with the classic metal -inspired trio, Neon Warship, that nods to metal forefathers like Led Zepplin, Black Sabbath, St. Vitus, Clutch and newer heavy rockers like Queens of the Stone Age.
In late 2011, Neon Warship put finishing touches on a demo with local engineer/producer, Brian Whitten, and spent 2012 bringing their colossal sound to new fans around the region.  Their travels included opportunities to share the stage with Southern Lord’s Enabler (during a leg of Enabler’s headlining run), Truckfighters, Vultures, Valley of the Sun, Before the Eyewall, and Lo-Pan, and performances at Dudefest in Columbus, Ohio and HoliDayton, in their hometown.
Ghettoblaster recently caught up with Schindel to discuss the demo.  This is what he had to say about it…
When did you begin writing the material for your most recent demo?
We started getting together around August of 2010.  We took our time jamming and recording practice.  We didn’t write our first song for quite some time.  We officially named our band in June 2011 and played our first show in July of that year.
What was the most difficult song to take from the initial writing stage through recording and mixing?  Why was it so troublesome?
Probably “Paralyzed.”  It’s a 10 minute song and there’s so much packed into it.  It’s really like three songs in one.  The crazy thing about that song is that we wrote the end part first.  We jammed on that for awhile before writing the beginning, which is a similar riff.  As we were writing, it kept getting longer and I think Matt and JB kept wondering when we’d play the end parts. When we finally did, it seems well worth the wait.
Which of the songs on the record is most different from your original concept for the song?
I would say “In Waves,” the third song we wrote.  This song begins heavier than I imagined us originally.  I think I was just super pumped up that day.  Simple, yet brutal.  I will never shy away from a good heavy riff.  It’s in my blood.
Did you have any guest musicians play or sing on the record?
No, it’s just the three of us.  Although it would be cool to have some friends record with us.  Maybe next time.
Who produced the record?  What input did that person have that changed the face of the record?
Our friend Brian Whitten recorded the CD.  He really helped me fine tune my sound.  We recorded in a studio that had more than a dozen guitar heads and many cabs to play, of which quite a few made an appearance.  We worked together many, many hours recording and mixing.  He was a trooper.
Is there an overarching concept behind your demo that ties the songs together?
Not really.  There wasn’t any plan for a concept, but I do think the songs flow well together.  Other that switching songs three and four, they’re almost recorded in the order we wrote them.
Have you begun playing these songs live and which songs have elicited the strongest reaction from your fans?
Yes we have.  We’ve played quite a few shows in our hometown, Dayton, Ohio. We’ve also played a hand full of shows out of town.  We hope to get out a lot more this year.  The two songs that I think get the strongest reactions are “Weather Breeder” and “Paralyzed.”  They are two different kinds of songs to me, but I think they stand out because they have memorable melodies in the guitars and vocals.
(Listen to the demo here: http://neonwarship.bandcamp.com.)