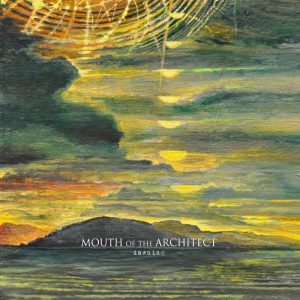 During their tenure together, evolution has been a constant for Dayton Ohio’s Mouth of the Architect.  Many of these changes have resulted from the many lineup changes – one time guitarist Greg Lahm left to form Struck By Lightning and Fever Nest, Alex Vernon departed following intermittent membership, and a cast of rotating bass players (including members of Botch, Intronaut, These Arms Are Snakes, and Russian Circles) have counted themselves among the ranks, with one stepping up as guitarist and vocalist (Kevin Schindel, formerly of Twelve Tribes).
One constant has remained: the group’s devotion to keeping the ship afloat, and following in the noisy wake of forefathers like Neurosis and Godspeed You! Black Emperor.  While this singular constant is the modus operandi, not one of the band’s records mirrors or mimics the next.  Growth and experimentation are the life’s blood of the band’s existence, and these transformative mediums become more and more apparent in every record.
Ghettoblaster caught up with vocalist/guitarist Kevin Schindel while he sat out the band’s Summer tour (in favor of enjoying his darling new family addition, daughter Harper) to discuss Dawning, their latest long-player for Translation Loss.  This is what he said about it….
When did you begin writing the material for your most recent LP?
We started writing in 2011. Steve Brooks was living in Detroit, so he’d come down and we would jam for quite a few days at a time. Sometimes we would be working on a couple songs at a time. We’d go home, work on our individual parts, and then bring our new ideas to the table. Steve was the brain behind most of the songs. We would write the riffs together and he would come up with the arrangements.
What was the most difficult song to take from the initial writing stage through recording and mixing? Why was it so troublesome?
I would say “It Swarms” was the most difficult. We had a few different versions of this song before we came up with the one on the record. I didn’t even finish my parts until I was actually recording it. The solo in the middle was the last thing I recorded because I hadn’t finished it before then.
Which of the songs on the record is most different from your original concept for the song?
Again, I’d go with “It Swarms”. The original incarnation of this song had the end for the beginning. We had lots of variations, including other parts that didn’t make it in the song. There were a few different arrangements for the end before we settled with the way it is now. But after all the changes, it turned out to be one of my favorites.
Did you have any guest musicians play or sing on the record?
No guests on this album. It’s just the five of us on this one.
Who produced the record? What input did that person have that changed the face of the record?
Our own guitarist/vocalist Steve Brooks produced this album at his studio in Detroit. Our buddy John Lakes (who has assumed Schindel’s place on the current tour) recorded my guitar parts here in Dayton. I think Steve had an idea how he wanted it to sound and executed it exactly like that. We are very happy with the end result.
Is there an overarching concept behind your new album that ties the record together?
Not so much a concept, but we did try to tie the songs together. We definitely wanted that feeling when you listen to it, one continuous listening experience.
Have you begun playing these songs live and which songs have elicited the strongest reaction from your fans?
Yes. We actually premiered these songs at a show in our hometown. I’d say “Sharpen Your Axes” is one of our stronger songs live. It starts out mellow and mysterious, and then ends with one of the heaviest moments on the album. Definitely one of my favorites to play live.