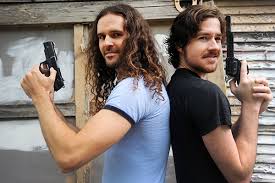 Austin guitar and drum duo, Black Pistol Fire are burning barns with their released album Hush Or Howl (Modern Outsider Records).  During the course of the album, the group channels the raw delta blues and rustic folk with an electrified and muscular attack.  To date the band has shared stages with varied, like-minded groups like Band Of Skulls, Weezer, Black Rebel Motorcycle Club, Shonen Knife and Lucinda Williams.
Ghettoblaster recently caught up with Kevin McKeown (guitar/vocals) to discuss the album.  This is what he said about it.
When did you begin writing the material for your most recent album?
We began working on the record just over a year ago. I wrote a bunch of songs so we could bang out another record in the fall of 2012. We went to Detroit again to record and managed to squeeze out twelve songs in a day and a half. After hearing the mixes, it was clear we were not happy with the overall sound and production, so we booked some studio time a few months later here in Austin, at 5th Street Recording. During those months, it gave us time to live with songs and really let them breathe. We re-recorded a few songs from the last session along with a few new ideas in April of 2013 and things were sounding a whole lot better. The third and final round came a few months later at 5th Street Studios again, after being on the road for about five weeks. I normally don’t try to write on the road, but we had a day booked in the studio two days after we got home. I would lock myself in hotel bathrooms, chipping away at ideas before the clock ran out. “Alabama Coldcock” and “Dimestore Heartthrob” were the two songs cut for that last session.
What was the most difficult song to take from the initial writing stage through recording and mixing?  Why was it so troublesome?
“Dimestore Heartthrob” was the working title for quite a few song ideas that just never seemed to feel right. There must have been at least three different songs under that title with the same theme that never made the cut. I think they did not work because it felt forced. For me, trying to push a song somewhere it shouldn’t is risky and sometimes can feel not very authentic. We were very happy with the final cut, because it took about 3 or 4 takes and it just felt right. There wasn’t any time to complicate things.
Which of the songs on the record is most different from your original concept for the song?
I guess I already kind of answered that with the last question. Maybe “Your Turn To Cry” as well. I thought originally, that would have been a good upbeat punk rock song…but never underestimate the power of the Banjo!
Did you have any guest musicians play or sing on the record?
Our dear friend Mike Rocha helped out with some backing organ on two tracks.
Who produced the record?  What input did that person have that changed the face of the record?
Mike Rocha was the producer. He has been a longtime friend as well as a sonic workhorse for BPF since we began making records. He has worked on everything we have ever done and knows how to get the sounds were looking for. A great dude to bounce ideas off and he always smells like Peaches!
Is there an overarching concept behind your new album that ties the record together?
The title of the record came from a burden of frustrations we were dealing with as a band in the last year. This was a put up or shut up record for us. Put everything into or don’t do it at all. We are both really proud of it and we hope people will dig it too!
Have you begun playing these songs live and which songs have elicited the strongest reaction from your fans?
We have been playing some of these songs live for almost a year now, but some we have only been playing a couple weeks. “Hipster Shakes” is a song that seems to have a strong reaction, along with “Run Rabbit Run”. I think because we have been playing them for a while now and we are still not sick of them yet, which is always a good sign.
(Watch “Alabama Coldcock” video premiere via CraveOnline here: http://www.craveonline.com/music/articles/680353-video-premiere-black-pistol-fire-alabama-cold-cock
Watch Black Pistol Fire perform “Hipster Shakes” live at Audiotree here:https://www.youtube.com/watch?v=ALyZX17N9go
In addition upcoming appearances with Wolf Mother, Black Pistol Fire has just been announced as a performer on the Bonnaroo Music And Arts Festival to take place this June. This follows the recent confirmation of the group to appear at the X Games (X Music Festival) as well as the Austin City Limits Music Festival.
See them live:
May 6- St Louis, MO @ The Pageant
May 9- Tulsa, OK @ Cain’s Ballroom
May 10- Austin, TX @ Emo’s
May 11- Dallas, TX @ House of Blues
May 12- Houston, TX @ House of Blues)