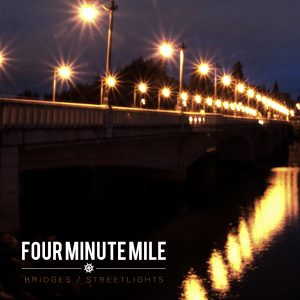 The mere mention of a band that borrows their moniker from the title of a Get Up Kids record is probably more likely to garner groans from Ghettoblaster’s minions (and writers…Andrew…) than cheers.  But I’m the head bitch in charge of the website, and I spent the ‘90s in the Legion of Doom basement soaking in sets by Hot Water Music, Elliott and Braid.  While being a 36-year-old emo devotee doesn’t get me any cool points amidst my peers, I don’t really give a shit.  Because in 2013 bands like Four Minute Mile are bringing the shot in the arm the genre’s been waiting for over the last decade and a half.
In league with contemporaries like Such Gold and The Wonder Years, Four Minute Mile blend pop, punk, and hardcore influences in a seamless way that makes you forget just what decade you’re in.  They must’ve done the same for the folks at Better Days Records, who will release Bridges/Streetlights this spring. Ghettoblaster discussed the release with drummer Kevin Hart who had this to say about it…
When did you begin writing the material for your EP?

We started writing songs for Bridges/Streetlights when we were on tour last January. We were staying at Sebastian’s grandmas house in Santa Barbara, California on a day off and wrote what turned out to be “Grey.” The rest of the songs were written after we got home from said tour.
What was the most difficult song to take from the initial writing stage through recording and mixing?  Why was it so troublesome?
I think “Camellia” was the most difficult. It was the final song written before we started recording so we still had parts that weren’t completely finished by the time we went in to begin tracking.
Which of the songs on the record is most different from your original concept for the song?

“Sunburnt” was written and scrapped at least twice before we got to the version you hear on the record, so probably that one.
Did you have any guest musicians play or sing on the record?

Some of our best friends play in a band called Honorable Mention, those guys came up and helped do the group vocal parts.
Who produced the record?  What input did that person have that changed the face of the record?

Ahren Lanfor produced the record. He produced our first EP as well and knew what we were trying to do with this one. He understood we wanted the record to sound as tight as possible and didn’t let us settle for good enough.
Is there an overarching concept behind your new album that ties the record together?

Growing up from the town we live in and all that entails.
Have you begun playing these songs live and which songs have elicited the strongest reaction from your fans?

“Sunburnt” and “Heisenberg” have been the best reactions, just because those both have catchy sing a long parts for everyone to get involved.