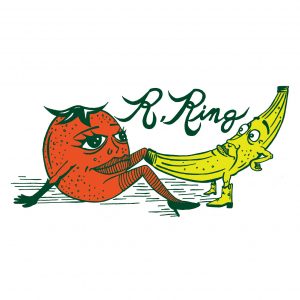 The Breeders’ Kelley Deal and Ampline’s Mike Montgomery teamed up to form R. Ring – an unorthodox rock duo hailing from Dayton, Ohio and Dayton, Kentucky respectively. Characterized primarily by voices, guitars and keys, R. Ring is sparse, chaotic, abrasive and lulling, often within the same song.  Misra Records will release their debut 7” – “Fallout & Fire” b/w “See” – on October 30.  The band is staunch about unrolling things a little at a time and the two-song 7” is telling of this spirit.
Ghettoblaster recently caught up with Ms. Deal to discuss the effort.  Here is what she told us about it:
When did you begin writing the material for the 7″?
We started writing together last year. Mike has a studio in Cincinnati (Candyland) so we went in and just started recording.  We really liked how “Fall Out and Fire” turned out so when Leo DeLuca at Misra contacted us about putting something out that was the song that came to mind.  “SEE” was recorded one day this summer after I sat under a hot bridge in Cincy waiting for Mike and Kristian to get done skating…
What was the most difficult song to take from the initial writing stage through recording and mixing?  Why was it so troublesome?
Well, like I mentioned above, I had to waste half a day waiting for these two jerks to get done playing ’round so we could start recording!  BUT – once we got into the studio – things went along swimmingly.
Which of the songs on the record is most different from your original concept for the song?
They both evolved really naturally.  We had been playing them live for awhile so when we went in to record them they took shape pretty quickly.
Did you have any guest musicians play or sing on the record?
Well as a matter of fact we did. Our friend, Kristian Svitak (1031 Skateboards, The Heartaches) played drums on the “banana side” song, “SEE.”
Who produced the record?  What input did that person have that changed the face of the record?
Mike and I wrote, recorded, mixed and mastered it ourselves. The idea of bringing some poor fucker into this mix is not something we’re interested in at this time!
Is there an overarching concept behind the 7″ that ties the record together?
Both songs involve death.
Have you begun playing these songs live and which song has elicited the strongest reaction from your fans?
We play them both live, but comparing them is like comparing oranges to bananas.