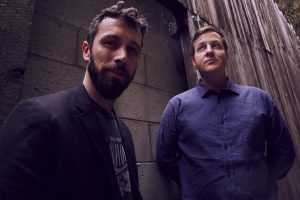 ALL WALLS is a new music endeavor from Keith Waggoner and Samson Crouppen of Holy Folk, an LA collective whose debut received praise from The Village Voice, USA Today, KCRW, LA Weekly, Pigeons & Planes and more. The production duo will release their self-titled debut on August 14 and recently unveiled the video for lead single, “The Spider (featuring GRÉTA)”. CMJ debuted the clip saying, “The video for the sultry track is Eyes Wide Shut with a True Blood twist, so don’t cut out early.”
“The Spider (featuring GRÉTA)” also came out as a 7-inch on July 17 b/w New Vibration, a summer tune if there ever was one.
Ghettoblaster recently caught up with Waggoner to discuss the endeavor and their self-titled debut. This is what he told us.
When did you begin writing the material for ALL WALLS’ self-titled debut?
Some of the songs have been around for a little while, maybe since 2013. Sam and I were both still active with our band Holy Folk. I was writing for various reasons and Sam was in the studio a lot helping me flesh out material. Some ideas were derived from my work as a composer. I write a lot for film, but the songs don’t necessarily have a home or see proper release. A few of the tracks were originally intended to go on the next Holy Folk record. We were just churning out these rad tunes and we didn’t really know what we were going to do with them. It wasn’t until early this year that it started to feel like an album.
What was the most difficult song to take from the initial writing stage through recording and mixing? Why was it so troublesome?
Probably “Once They’re Gone.” The music for that track came very quickly, but the lyrics were a mystery to me. I was going through a bout of writers block and they just weren’t coming, so I shelved the song for several months, maybe even a year. It wasn’t until I met Jimmy Sweet, who ended up singing the lead vocal on the recording, that I felt inspired to finish writing the song. I had seen his band Lady Low perform and a bar near my place in Hollywood. Total chance encounter, but I loved his voice and thought it would be perfect for the song, so I approached him about working together. That spurred the concept and the recording came together within a couple days.
Which of the songs on the record is most different from your original concept for the song?
I would say “The End of a Long Walk.” It’s an acoustic number that I’ve been carrying around for a few years. The first time I recorded it was actually for my wedding procession in 2009, but at that point it was accompanied by a synth arpeggio and sounded quite a bit different. Back then it was called “The Long Walk”. The melody resurfaced last year when I was working on a film called 5 Pilgrims. I adapted the original idea and re-recorded it as folk score with guitar, banjo and violins. I never really intended for it to have words. I was working on the film and the album in tandem and lyrics came to me one night, so I just went for it. I rearranged the piece again and made room for a lead vocal. By that time, the song had taken on a new, very strong identity and it was ironically about the end of a relationship. We thought it would be fitting to record it as a duet, like a conversation between a woman and a man, so I asked Charlene, who also plays violin on the track, to come and sing with me.
Did you have any guest musicians play or sing on the record?
We had quite a few guests actually. I think there are seven vocalists total on the record including me and Sam, as well as a number of other players who contributed to the instrumentation. A lot of the same folks who were involved with Holy Folk, really. Ryan George and Tony Lyman both contributed songs to the album. Charlene Hang and Shannon De Jong performed all of the strings. JR Sage played some pedal steel for us and Josh Caldwell played harmonica on a track. We collaborated with an Icelandic vocalist named GRÉTA on our first single “The Spider” and I spoke earlier about Jimmy Sweet who sings the lead on “Once They’re Gone.”

Who produced the record? What input did that person have that changed the face of the record?
I recorded and mixed everything, but it was a collective effort for sure. That’s kind of how these records come together. Samson had a lot of input in the studio and definitely helped shape things creatively. The same is the case for a lot of the other musicians involved. Most of these guys are close friends that I’ve been making music with for years and there is a lot of trust and creative freedom when we’re in the room together working on a track.
Is there an overarching concept behind your new album that ties the record together?
I always joke that it’s a breakup record. A lot of the lyrics would suggest that but it wasn’t intentional. Change is definitely a recurring theme though, musically and lyrically. The songs are all very individual and stylistically diverse, hence the name of the project.
Have you begun playing these songs live and which songs have elicited the strongest reaction from your fans?
We actually just played our first show a few days ago. Ryan George, Nick Ceglio and Charlene Huang are all helping out live and they make things pretty easy. We haven’t played the whole album yet but everything so far I’m feeling really good about. “New Vibration” was a lot of fun to play live.
(Visit the band at www.allwallsmusic.com.)