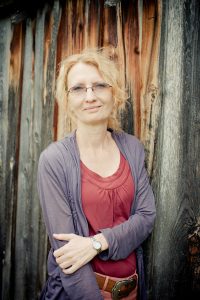 Before embarking on her current career as a hematologist/oncologist affiliated with New York University Hospital, Karen Haglof paid years of dues on the rock scenes of her Minneapolis hometown and her beloved New York City. Throughout the ‘80s and early ‘90s, she was an active partici­pant in the fervid musical underground of downtown Manhattan.
As a guitarist and vocalist, Karen moved with ease between the tuneful post punk guitar pop of The Crackers, the noise–rock of Band of Susans, and the abrasive, ecstatic experiments of composer Rhys Chatham and painter/sculptor Robert Longo (both still active in music). Now she is releasing her long-overdue debut solo album Western Holiday. The album was recorded at Eric “Roscoe” Ambel’s Cowboy Technical Services in Brooklyn NY and mixed at Mitch Easter’s Fidelitorium in Kernersville, NC.
Western Holiday revolves around Haglof’s hard-hitting yet spry, stripped-down blues-inflected playing and writing. As the first fully–realized showcase for her master­ful fret work, spirited singing, and impossibly catchy riffing, Western Holiday represents not only Karen’s return to making music but her emergence – after years of collaboration – as a complete creative artist in her own right.
Though you may search high and low in the departments of our nation’s hospitals, it’s a pretty safe bet that you won’t find on staff a more talented singer, songwriter and guitarist than Karen Haglof.
Ghettoblaster recently caught up with Haglof to discuss the record. This is what she told us about it.
When did you begin writing the material for your most recent album?
I started writing in winter 2011. At that time, I had picked up a guitar after years away from playing, messing around with open tuning fingerstyle. I thought I probably wouldn’t be in a band again and I wanted to play songs on the guitar that sounded full and complete alone. The material for Western Holiday was completed by early 2013.
What was the most difficult song to take from the initial writing stage through recording and mixing?
I would probably say “Don’t Straddle Fences”; the writing came pretty easily but it didn’t seem to translate as well for the feel as far as I was concerned, in the recording and mixing process.
Why was it so troublesome?
I was looking for a sparse sort of lonely feel, and initially envisioned just guitar and vocals alone. When we first put down the tracks it was with bass and drums, but it didn’t have the feel I wanted. It was a long process to strip away the bass and drums and add them in gradually as the song built to the end, but I’m pretty pleased with how it turned out.
Which of the songs on the record is most different from your original concept for the song?
Well I guess from my above response, “Don’t Straddle Fences” might qualify, however, “Danger Point” also comes to mind. It started out as a shuffle, not what I think of the ‘swamp beat’ it has now.
Did you have any guest musicians play or sing on the record??
The late great Faye Hunter sang the lead vocal on “Lincoln Letters”; Mitch Easter played slide guitar on “Musician’s Girlfriend Blues”; Steve Almaas did the backing vocal on “Lincoln Letters,” and played the slide guitar solo on that song as well.
The core unit is me on guitar and vocals, Steve Almaas on bass and CP Roth on drums and piano.
Who produced the record?
Steve Almaas (Suicide Commandos, Beat Rodeo and solo projects).
What input did he have that changed the face of the record?
Steve pushed for an album rather than just writing and recording a few songs. He brought the songs from guitar and vocals to full band material but kept the droning guitar/vocal aspect intact. He was tactfully critical, but in a really supportive way that made the whole process comfortable. He played bass and did some vocals and guitar on the record and brought in CP Roth on drums and keyboards.
Is there an overarching concept behind your new album that ties the record together?
Hmm, I guess this is a personal mix of various styles I have played — from open tuning avant-garde with dissonance and strong overtones, to noise rock to heavy metal and country blues covers and fingerstyle. I like melodies, I like strong rhythms and noise and droning overtones in guitar music. I suppose the concept is an amalgam of my past experience in guitar playing, and the songs just me living my life both in reality and imagination and trying to put something true of myself into words and music.
Have you begun playing these songs live and which songs have elicited the strongest reaction from your fans?
No live dates as of yet…..
(Visit Haglof here: http://karenhaglof.com/.)