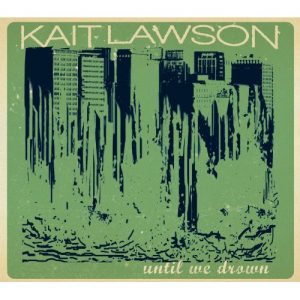 After spending time as a musician in both Nashville and New York, Kait Lawson returned to her hometown of Memphis, Tennessee to record her debut album, Until We Drown. Kait’s uncompromising songwriting takes a wry, yet deeply personal look at broken homes and fractured relationships. She takes full responsibility when appropriate, but there is plenty of blame to go around. Lyrically, no one walks away unscathed, but the music both lifts and soothes, providing a thoroughly enjoyable and ironic landing place for the listener.
The songs are haunted by Guthrie and Kerouac while remaining rooted in the Southern landscape. Muddy Waters of Mississippi, home in Tennessee, regretful cigarettes, midtown Memphis, squandered youth, temporal angels, perfume from the graveyard, goodbyes and the lies of Judas. It’s all here…the virginal and profane, the kiss-off and the yearning, the blues and the hope.
Ghettoblaster caught up with Lawson before the March 19 release on the album via Madjack (Lucero’s label) to discuss the record.  This is what she said about it…
When did you begin writing the material for your most recent album?
All these songs were written over the past five or six years.
What was the most difficult song to take from the initial writing stage through recording and mixing?  Why was it so troublesome?
“Until We Drown.” It’s a long song with lots of emotion, and it was difficult to figure out the instrumentation that best conveyed that.
Which of the songs on the record is most different from your original concept for the song?
I think it would be “Spin Me Around.” It’s the song that’s been around the longest so it became kind of stale to me until Steve Selvidge came in and worked his rock & roll magic.
Did you have any guest musicians play or sing on the record?
Yes. I was lucky enough to have some Memphis favorites on this record. Al Gamble (Mark Broussard, City Champs,) Steve Selvidge (The Hold Steady, Big Ass Truck,) George Sluppick (Chris Robinson Band, JJ Grey and Mofro,) Sam Shoup (Ringo Starr, John Legend,) Dave Cousar (Al Green, Amy Lavere,) and Harry Peel (Riverbluff Clan.) They all came in and tracked the songs live together on the studio floor.
Who produced the record?  What input did that person have that changed the face of the record?
Lucas Peterson. He’s a pro. I trusted any and all of his input. We just hung out and had fun and came up with what we have now!
Is there an overarching concept behind your new album that ties the record together?
I guess the concept would be me and my stories. Each song is a story from either my life, or the life of someone close to me.
Have you begun playing these songs live and which songs have elicited the strongest reaction from your fans?
Yes. people seem to like “Omaha” because it’s a fun song, and fun to play. Also, everyone usually sings along with me on “Until We Drown,” so that’s pretty awesome.