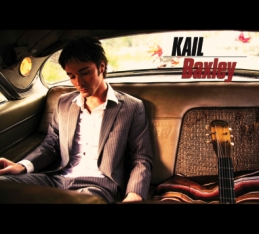 Heatstroke/The Wind And The War

KaiL Baxley grew up in the small backwater town of Williston in Barnwell County, South Carolina, the birthplace and stomping grounds of the late great soul legend James Brown, with whom KaiL shared an unlikely friendship as a child.
“Yeah, James used to say, ‘Boy you bein’ good?’ I’d say, ‘Yes sir.’ He’d say, ‘You know you doin’ wrong! Nah, show me your moves lil’ man!’ And we’d have a little dance off. I’m pretty sure he always won, ha, ha. There’s something about the groove of James Brown that has always stayed with me.”

But, the idea of playing music only arrived to KaiL after his godfather, a former band director, bought him a guitar for high school graduation. He never put it down. After years of singing for his supper across the South, Europe and parts of Africa, KaiL found himself in California with hopes of composing music for film scores. A chance meeting with engineer/ producer Eric Corne convinced him to write a record of his own. Within a few months, the two were in the late Elliott Smith’s New Monkey Studio with some of LA’s finest musicians. The result is his debut effort, a double EP drawing heavily on both the literary and musical influences of his Irish/Southern roots.
Ghettoblaster caught up with KaiL to discuss his debut double EP, Heatstroke/The Wind And The War, which will be released March 19 via Forty Below Records.  This is what he said about it…
When did you begin writing the material for your debut double EP?
Two Summers ago in County Wicklow Ireland
What was the most difficult song to take from the initial writing stage through recording and mixing?  Why was it so troublesome?

I’d say “HeatStroke.”  There is a massive amount of intricacy and layering in that track. So it took a little time to get it just right.
Which of the songs on the record is most different from your original concept for the song?
None really.
Did you have any guest musicians play or sing on the record? |
We had Bob Dylan’s former guitarist, Freddy Koella, play violin on a couple songs and Doug Pettibone (guitarist for Lucinda Williams) came in and played pedal steel and mandolin on a few.
Who produced the record?  What input did that person have that changed the face of the record?
Eric Corne.  He really has a way of helping you achieve the sound that you’re going for. Also he’s got a fantastic ear. I’m not one who likes to record a part over and over. I usually give it a take or two and that’s it . Eric knows what he’s listening for and will push for that third or even fourth take.
Is there an overarching concept behind your new album that ties the record together?

Well this record is actually two different EPs; Two projects recorded at the same time with different bands. One is acoustic and delicate, if you will, and one is a little more lively . The idea of having one on each side of a record appealed to me.  The light and the dark I suppose.
Have you begun playing these songs live and which songs have elicited the strongest reaction from your fans?