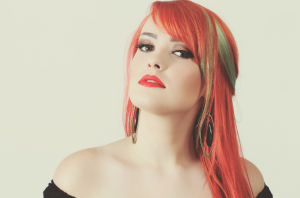 After a local release of her debut album, Sun & Mirror, Kaela Sinclair‘s quick arrival onto the Texas scene led to a fan base that is growing as eagerly as Sinclair herself. In collaboration with acclaimed producer and drummer, McKenzie Smith (Midlake, Regina Spektor, St. Vincent), the 23 year old from Denton, TX is ready to showcase her compositional skill, lush vocals, and intelligent lyrics. Sun & Mirror, which saw national release on May 13.
The album, recorded at Redwood Studios in Denton, TX, features an all-star team of DFW musicians including: Buffi Jacobs (Polyphonic Spree), Daniel Hart (Broken Social Scene, St. Vincent, Dark Rooms), Fiona Brice (Placebo, Kanye West), Joey McClellan (Midlake, The Fieros), Evan Jacobs (Polyphonic Spree, Tack The Boy Disaster, Midlake) and Jesse Chandler (Midlake).
Ghettoblaster recently chatted with Sinclair about the record.  This is what she told us.
When did you begin writing the material for Sun & Mirror?
I started writing these songs in June of 2012, but I wrote my best ones that winter. I had a period of about six months where I was more productive than ever and writing at least a song a week. It was difficult narrowing it down to eleven but some very clearly stood out as my best songs.
What was the most difficult song to take from the initial writing stage through recording and mixing?  Why was it so troublesome?
None of them were troublesome, per say, but songs like “Ghosts You’ve Won” and “Like Kings” took longer to put together because I wanted a very full sound that required a lot of layering. I know that “Ghosts You’ve Won” was a tough one to mix – simply because we layered so many instruments. It has multiple guitar tracks, bass, multiple drum tracks, multiple keys and synth tracks, violin and cello tracks, and tons of vocal tracks.
Which of the songs on the LP is most different from your original concept for the song?
“Lock and Key” originally had a different feel, but changed quite a bit when the band got together to play it. McKenzie Smith (my co-producer and drummer on the album) had an idea for a drum part that was swung instead of straight and when we tried it the song transformed into something a little bit sexier and a little bit darker. It felt so good I had to keep it.
What was it like having Midlake play on the record? Did they help with any of the arrangements?
It was amazing! They are phenomenal musicians and super nice guys. The first time we played together was when we recorded “Coral Castles,” which ended up being the last track on the record. I showed them my demo and gave them a chart with the chords and melodies on it. We talked through it for a few minutes and then we just played. I was surprised (and relieved!) at how quickly it came together. It was easy and natural. I certainly credit a lot of that to their killer musical instincts.
Have you begun playing these songs live and which songs have elicited the strongest reaction from your fans?
I’ve been playing them live for a few months now. Creating a live set presented me with very different challenges than the challenges of recording. Sometimes just figuring out the logistics of “who plays what, and when?” is really tedious, but the hard work is worth it when the fans react well. I always feel a connection to the audience when we play “The Realist” and “Original Sin” – those songs feel energizing. But when the night is just right the intimacy of songs like “Remnants Of” and “Run” feels pretty special.
(Visit her online here:
Main Website
Twitter
Facebook)