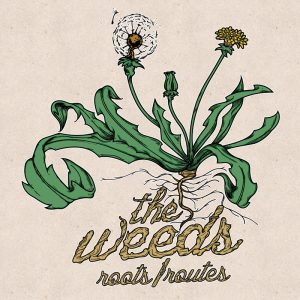 The Weeds, featuring former members of Transit/Late Nite Wars and Defeo will release their debut EP Roots/Routes via fledgling upstart indie label Catskull Records (distributed through No Sleep Records’ mailorder). What influences the band musically are bands that are original and aren’t conforming to any common style or genre; bands like Tegan and Sara, The Early November, Saves The Day, and Nirvana provide a relative touchstone though.
The band will be touring out to the midwest and the east coast over the next few months and into the summer, but Ghettoblaster caught up with Justine DeFeo, the band’s vocalist and guitarist, first to discuss the EP.  This is what she said about it…
When did you begin writing the material for your EP?
We began writing the songs for our Roots/Routes EP in July of 2012.  We were working on “Death Valley” and “Attention” when our bassist Jarek joined the band.  After that, we wrote our four other songs collectively.
What was the most difficult song to take from the initial writing stage through recording and mixing?  Why was it so troublesome?
“Sunset Eyes (Beautiful Life)” and “Stranger Than Fiction” were two songs that we wrote right before going into the studio.  I wouldn’t say they were difficult to record and mix, but we came up with a lot of ideas on the spot, like backup vocals, certain effects, and tambourine parts in “Stranger Than Fiction.”  We really wanted to make sure both of these songs were given the same attention as the other four songs and would contain the same amount of depth.
Which of the songs on the record is most different from your original concept for the song?
We changed the layout for “Feel Nothing” a lot.  We wanted to make sure no part seemed to drag on.  When I first brought the song to the rest of the guys, it contained a longer second verse, and a weird kind of guitar solo part.  We decided to switch the song around to make it as straight forward as possible and eliminate all of the random parts that didn’t have to be there.
Did you have any guest musicians play or sing on the record?

Nope, but our friend Mike Moschetto (Aviator and Long Lost), who recorded us, gave us a lot of great advice whenever it was needed.
Going into the studio, overall we knew how we wanted each song to turn out.  We worked on back up vocal ideas for “Sunset Eyes (Beautiful Life)” and “Stranger Than Fiction” with Mike, especially since it was our last day of recording and we had to bang out the vocals.
Is there an overarching concept behind the record that ties it together?
I don’t think so, I think every song has its own different vibe and tells a different kind of story.  Also, since Joe and I write the original concepts and lyrics of the songs separately, the songs tend to be pulled in a lot of different directions.
Have you begun playing these songs live and which songs have elicited the strongest reaction from your fans?
Yes, we started playing shows in the beginning of September.  I think “Death Valley” and “Up To Speed / Your Life” are two songs that the crowd reacts to the strongest.  They are both pretty upbeat and seem to catch the attention of the crowd emotionally.
(Find out more about the band here: www.facebook.com/theweedsma.)