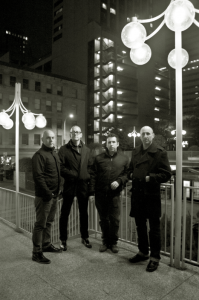 With waves of haunting synthesizers, crooning vocals, jagged guitars and pulsating beats, Seattle quartet Jupe Jupe creates pop music that moves.  Further, the group introduces a darkly cinematic atmosphere in its latest release, Crooked Kisses’ 10 infectious tracks about unrequited lust, love and heartache—influenced by British new wave, ’60s European spy films and lonely, ghost-town Americana. The band has crafted a dramatic soundscape that builds upon its previous two releases, Invaders and Reduction in Drag.
Teaming up once again with Martin Feveryear at Jupiter Studios (REM, Robert Fripp, Death Cab for Cutie, Modest Mouse), Jupe Jupe spent nearly two years finessing a collection of hooks, melodies and choruses into a singular vision for the Crooked Kisses album.
Ghettoblaster recently caught up with guitarist Patrick Partington to discuss the record, which sees release today via their Jupe Jupe music.  This is what he told us.
When did you begin writing the material for Crooked Kisses?
We started writing Crooked Kisses in early 2012, after our previous album Reduction in Drag was released. We spent a few months deciding on the sound and how we wanted to construct the songs. Originally, we were aiming for an Echo and the Bunnymen/Roy Orbison/Giorgio Moroder/Italian film score vibe—very mournful and haunting, but catchy and upbeat at the same time. We also reversed the process of how we previously wrote songs. On this record, My (My Young, our singer) and Bryan (guitarist Bryan Manzo) started with the vocal melodies and then we built the instrumentation around them. After the songs were completed, we’d discuss the meaning of each tune and pore over lyrics as a group for several evenings at a time.
What was the most difficult song to take from the initial writing stage through recording and mixing? Why was it so troublesome?
“Love to Watch You Fall” was a tough one in the writing stage—the original vocal melody in the verse was too angular, so we rewrote it to be more melodic and contrast better with the post-punk sounding pre-chorus. We also added a Jupiter 6 step sequence to the verse to give it a retro synth-disco feel.
Which of the songs on the record is most different from your original concept for the song?
“Hollow.” We didn’t find the right feel for it until My experimented with the synths and Bryan re-wrote the guitar leads. The song probably went through five incarnations until we were all satisfied with the sad/happy aspect of it. The chord changes remained the same, but that was about it. Previously, it was much more of a straight-ahead song about missing someone. We wanted to avoid the more obvious clichés and dig a little deeper (musically and lyrically) into how a person feels when they feel trapped in a relationship that’s become a desolate, passionless swamp. The crooning vocals in the chorus really nailed it.
Did you have any guest musicians play or sing on the record?
Nope—just the four of us!
Who produced Crooked Kisses?  What input did that person have that changed the face of the record?
Martin Feveyear at Jupiter Studios. He expertly finessed many tracks into a cohesive sound where melody carries the song and none of the individual parts are lost in the mix.
We wanted the album to come off as lush but edgy—“softly aggressive”—with beats that are intense but don’t overpower. Mixing wasn’t an easy task, given that we tracked multiple guitars, keyboards, percussion, and electronic effects on every song.
Martin also has similar musical tastes as us, and we spent lots of time talking about how groups such as OMD, Ultravox, and Sparks were able to capture certain sounds. Jonas G, who also works at Jupiter, did a fantastic job multi-tracking My’s lead vocals and harmonies. And our friend Trevor Dutton has a studio in Hansville, Washington with an amazing arsenal of synths that we could experiment with.
Is there an overarching concept behind the music that ties the songs together?
Heartbreak, loss, love, lust, hope and disappointment, and a loss of naiveté. We wanted the songs to lean toward dark and reflective, yet feel exciting too. Many of our influences come from British new wave, ‘60s Euro spy films and some old-school noir Americana. Those are all genres that successfully mix somber sounds with pop hooks, making you want to move (while your heart is aching and you’re crying in your drink). We spent quite a bit of time re-working the lyrics so that all of the songs made sense as a whole.
Have you begun playing these songs live and which songs have elicited the strongest reaction from your fans?
We’ve played six of the songs live. People have actually started to sing along with “Pieces of You” and “Love to Watch You Fall.” “Never Ask Why” is a dark one with a nice aggressive build up that catches many people by surprise, and “Vicariously” is a big closer—very fast, driving, and jagged. Makes you want to hit the accelerator (safety belts on, of course).
(Preview Jupe Jupe here:
DOWNLOAD / STREAM / EMBED:
Jupe Jupe – “Pieces of You” via Surviving The Golden Age)