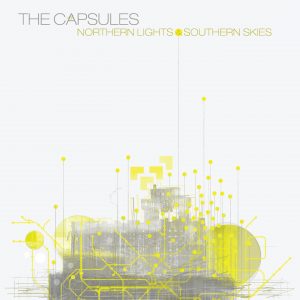 The Capsules are the kind of band whose tendencies for sleepless nights, writing pensive, late night reveries, unfolding as nuanced, lush pop tracks that tug at the heart strings and offering to uncover the mysteries of the universe.  At the core of the trio are Jason and Julie Shields who started making music together in high school, fell in love, got married, and started their first band, which was called Shallow. At an age when most people are trying to figure out what they want to do with their lives, they were already signed, professional musicians touring the world.  After Shallow ended, Julie and Jason continued writing, looking for a drummer to compliment their lush, bright pop lullabies. Then entered Kevin Trevino, and The Capsules found their missing collaborator.
Already receiving major accolades, the band has also captured the attention of a handful of famous fans. Steven Hillenburg, the creator of SpongeBob SquarePants, asked them to write a song for the show. Their songs have also been used in the PBS television show Roadtrip Nation and in several video games, including the megahit Borderlands 2.
Ghettoblaster recently caught up with Julie to discuss the band’s forthcoming record, Northern Lights & Southern Skies, which drops via Vespera Records on January 15, 2013.  This is what she told us about it…
When did you begin writing the material for your most recent album?
This album took about a year to write and record. We had pieces of songs written before that, but we started full bore about a year ago.
What was the most difficult song to take from the initial writing stage through recording and mixing? Why was it so troublesome?
In actuality this album went smoother than probably any album we’ve recorded in the past. Things really flowed well and everything came together pretty rapidly. But if I had to pick one, I’d say maybe “All At Once” because we had a tricky time balancing the main keyboard melody with the main guitar melody and the way the two play off each other.
Which of the songs on the record is most different from your original concept for the song?
I think that would be “Where it All Begins.” That was the first song we wrote for this record and it originally started out a lot more organic with some percussion and more guitars. When the record was starting to shape up we realized this song was sort of standing out a bit from the others so we pushed things around quite a bit and simplified the drums to better match some of the more electronic elements of the album. We also removed a lengthy intro and made the song a lot more concise than it was originally conceived.
Did you have any guest musicians play or sing on the record?
No, the three of us played everything on the record. We did use some new instruments though which was fun.
Who produced the record? What input did that person have that changed the face of the record?
We worked with a Kansas City/Lawrence legend named Ed Rose to record Julie’s vocals and mix the album for Northern Lights & Southern Skies. He brings with him decades of experience and really helped bring out the important qualities of each song. Being back in our home town and recording with Ed again was kind of like a reunion of sorts. It was also really helpful to get out of our home studio and into a different environment to finish things up for the record.
Have you begun playing these songs live and which songs have elicited the strongest reaction from your fans?
We are actually getting ready to start playing some of our songs from the new album in our upcoming shows and we’re really excited about it! “Across the Sky” and “With Signs Repeating” are going to be a blast to play live.
Is there an overarching concept behind your new album that ties the record together?
In the past we’ve made some records that, in hindsight, were little bit too varied in their approach. There was so much we wanted to do and so many different things we were trying to express in the songs that sometimes the albums as a whole weren’t as cohesive as they could have been. This album is a lot more focused and if there was a song or two that just weren’t fitting with the other songs they got cut, even though we really liked them. It can be hard to make a decision like that because songs are so personal and it’s hard to cut something that has come to mean a lot to you. But this time we were able to make the tough decisions and I think the album is much better for it.
(Listen to a song by the band here:  The Capsules – “Across the Sky”.)