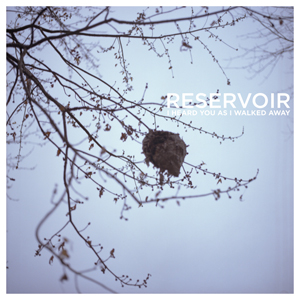 I Heard You As I Walked Away

Central Pennsylvania’s Reservoir traverse the fine line between melodic punk and emotional rock with an aplomb beyond their years, seamlessly integrating diverse influences—Fugazi, the Appleseed Cast, Texas Is The Reason—into a surprisingly intricate finished product; their songs swirl and punch in equal amounts, and rely more on unpredictability than meets the ear.
I Heard You As I Walked Away, the band’s latest, will be jointly released in late August by Major Bear Records, Dead Flowers Records and Broken World Media. To celebrate the album, the band has planned a run of Summer shows (detailed below).
Ghettoblaster caught up with Reservoir’s bassist/lyricist, Joshua Allamon, to discuss the record.  This is what he said…
When did you begin writing the material for your most recent EP?

We began working on this release as soon as we finished writing the two songs for the Bicycle Ride split. That was right around the time that we felt like we were settling into a sound we wanted to move forward with for awhile and were really excited to dive into the next release.

‘Bedfellow’ seemed like a difficult song to me because the vocals could have played out a couple different ways and with all three of us contributing main vocal parts back and forth, we harped on it for awhile and changed a lot of things at the last minute. ‘Migratory’ definitely stands out as well because we completely scrapped the original vocals/lyrics after we tracked the music and completely rewrote parts at a practice between recording sessions. We considered leaving that one off the record instead of trying to quickly put something together but I’m definitely glad we saw it through.

‘Migratory’ for all of those same reasons. We had recorded demo’s of all of the songs and when we listened back to that one, we realized it could be better and re-wrote parts musically before completely changing the vocals.

Yeah, my favorite part of recording this was being able to bring in a couple good friends to help us out and add some really cool elements to a few songs. Connor Beatty is a good friend of mine from the same area. He played violin on ‘Samantha’ and somehow managed to almost destroy a microphone. Michelle Cena of Ship Wrecks did backing vocals on ‘Samantha’ and ‘Migratory’ and knocked everything out in one take.

Steve Roche recorded and mixed this record at Permanent Hearing Damage in Philly. He helped a lot by approaching the recording as someone technically invested in the project but also as a listener. Several times we would play back a song after tracking the music and he’d find an area where something just didn’t sound right. Without the input he had, there would probably be a few things that we’d notice after the fact that we’d wish we changed. We wrote this record in a garage where a lot of nuances are muddied and Steve helped to translate it to record by picking those apart and having us try something else where the notes would mesh a little better or the parts transitioned a little more smoothly.

Three of us contributed lyrics and while we didn’t set out to put across any sort of message or idea specifically, I feel like we’re all in a similar phase of our lives and the lyrical content just seemed to fit. A lot of the songs deal with people you knew or thought you knew really well becoming scarce. When you’re in your 20s and so many things are pulling people in different directions, unfortunately its often make or break for a lot of friendships, relationships, and sometimes family. It’s a reality that everyone goes through and that wound up being the focus of a majority of the lyrics.