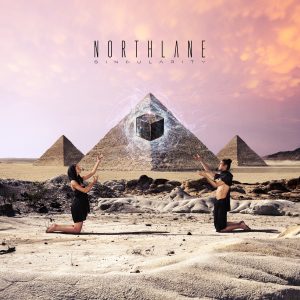 Formed in 2010, Northlane quickly became a standalone act in Sydney Australia’s metal and hardcore scene. After self-releasing their debut EP Hollow Existence, Northlane followed up the hype with 2011’s Discoveries (released by leading Australian Indie label UNFD). The high praise of that album lead to Australian tours with the likes of August Burns Red, Blessthefall, and Parkway Drive, as well as a Canadian run with Stray From The Path.
In late 2012, Northlane made their way to New Jersey’s famed Machine Shop studios to record with Will Putney (Lamb of God).  The resulting sessions became their second full-length offering, Singularity, which was released in the U.S. in November. Singularity has already won mass acclaim for its blend of post-hardcore and modern metal.
Ghettoblaster recently caught up with guitarist Josh Smith while the band was in the midst of a tour with Veil Of Maya, Structures, Vildhjarta and Here Comes The Kraken, their first performances in the U.S., to discuss the album.  This is what he told us.
When did you begin writing the material for your most recent album?
Some parts that were used on Singularity were actually parts that weren’t used for Discoveries. So some small bits date back quite far, but they were reworked and the majority of the writing happened in the last three months before we tracked the record.
What was the most difficult song to take from the initial writing stage through recording and mixing?  Why was it so troublesome?
“Worldeater” really was.  We had a very hard time with the vocals for that song, getting them right and then also the structure of the song changed a few times at the last minute which really threw a spanner in the works. Funnily enough, the way the structure ended up was the same as the original demo.
Which of the songs on the record is most different from your original concept for the song?
“Aspire” turned out way different to what it started out as.
Did you have any guest musicians play or sing on the record?
We did, Drew York from Stray From The Path appears on “Masquerade.”
Who produced the record?  What input did that person have that changed the face of the record?
Will Putney.  He really helped Adrian a lot with his vocal performance and that really helped the record turnout for the best.
Is there an overarching concept behind your new album that ties the record together?
It’s got a lot to say about the importance of the individual.  The songs are tied in much loosely with one another than they were on our first record, but this gave us the ability to explore more themes.

Have you begun playing these songs live and which songs have elicited the strongest reaction from your fans?
Yes we have, and the crowd favorite is “Quantum Flux”. Besides that it’s a different favorite in just about every place so it’s hard to say which other ones go down the best.
(Catch Northlane at one of these tour dates with Veil Of Maya, Structures, Vildhjarta, and Here Comes The Kraken:
12/07 New York City, NY @ Gramercy
12/08 Danbury, CT @ The Heirloom Arts Theatre
12/09 Albany, NY @ Bogies
12/10 Worcester, MA @ The Palladium
12/11 Montreal, QC @ La Tulipe
12/12 Toronto, ON @ Annex Wreckroom
12/13 Detroit, MI @ The Shelter
12/14 Chicago, IL @ Reggies)