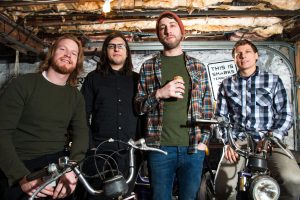 Founded in 2010, the members of Foxfires have cut their teeth in a variety of bands over the years, including time with Mountain Man, Four Year Strong, and Last Lights. Foxfires creatively piece together a unique, passionate, and inspiring listening experience; drawing influence form defining artists like The Suicide File, Reach the Sky, and Modern Life Is war.
Ghettoblaster recently caught up with vocalist Josh Lyford to discuss The Golden Age.  This is what he said about it.
When did you begin writing the material for your most recent album?
We pretty much started writing while we were finishing up our self titled 7″, it wasn’t a conscious decision to start working on a new record really.  It was more that we get together as often as possible to play music so of course we would want to start riffing some new stuff together.
What was the most difficult song to take from the initial writing stage through recording and mixing?  Why was it so troublesome?
Hmm, I don’t know if there is really a song that was way more difficult than the others, I think “Gravity is Honest” was one that we questioned the most, because it is the furthest departure from our usual sound. In the end though, I think we can all agree that song rules and we are glad we went through with it.
Which of the songs on the record is most different from your original concept for the song?
By default it would have to be “Black, White Birch.” Our old guitar player Marty and our drummer Conor had been tossing parts of that song around forever before finally it came together as a jam. It’s tough to say how much different it is now, but I can honestly recall Marty riffing that song right after we recorded the self titled.
Did you have any guest musicians play or sing on the record?
Not on the actual songs from this record, the bonus songs we did though. Pat and Josh from Mountain Man recorded some parts, although when we wrote the songs Josh was still in the band so I don’t know if it was really a guest vocal thing. With the actual “The Golden Age” 7″ songs, everyone in the band sang, and in a way, that was our version of guest vocals. It was a cool feeling to have everyone in the band recording vocals. Also, Marty, who played guitar on this record and the 7″ quit the band to get married right after this was finished so in a way that’s a guest vocal I guess.
Who produced the record?  What input did that person have that changed the face of the record?
Ian Van Opijnen recorded the album (and the self-titled) at Echo Room Studio in MA. The best part about Ian is that we have been friends with him for a long time, so we can all sit down and chat about things and no matter the outcome, we know we’re all cool with each other. He’s great and prompting ideas and discussion, while at the same time, if we are steadfast with something, that’s alright too. I can’t imagine having recorded this album with anyone else.
Is there an overarching concept behind your new album that ties the record together?
Just like the first 7″, a lot of these songs are about coping with death and loss. It has been a hard few years in the central MA community and these songs are a reflection of that. With that being said, it isn’t 100 percent gloom, it is more of an honest look at the whole thing. Kind of like saying, “Ok, this happened, how do I cope and how do I move on and grow from these events?” There is a lyric on “It was a journey” that goes “There is an equal weight on every man’s shoulders, the difference is in the strength of the man who holds it” and I think that is pretty indicative of the vibe of the record. We all deal with awful, tragic things in our lives and it really comes down to how we can grow from them.
Have you begun playing these songs live and which songs have elicited the strongest reaction from your fans?
We absolutely have, we’ve been playing a bunch of them actually and I think people enjoy them. It can be tough to gauge since the record isn’t even really out at this point, I can’t wait to see what people think once they’ve had a chance to listen to the recordings!