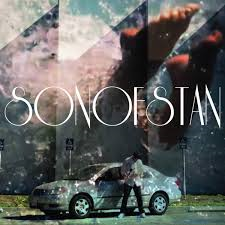 Ghettoblaster often uses a column inch or two here to set up the record featured.  In the case of Son of Stan’s Divorce Pop, Jordan Richardson, the man behind the record, said it best when he describes it this way: “Imagine driving around with your mom in a shitty Oldsmobile, you’re nine-years-old and its 100 degrees. You’re pissed because your favorite GI Joe (or My Little Pony) is trapped under the back seat. You’re driving to pick your older sister up from her gymnastics class. You’re siked because you’re going to Long John Silver’s later. Phil Collins “Sussudio” is on the radio. Divorce Pop is the musical version of that. I hope.”
Naturally, Ghettoblaster had to catch up with Richardson to discuss the project that just earned Son of Stan “Best New Act” honors at the Dallas Observer Music Awards.  This is what he said about it.
When did you begin writing the material for your most recent album?
Though, I’ve pretty much been solely a drummer for most of my career, I have been writing songs for many of my bands ever since Junior High. Son of Stan is an idea I’ve had for a long time and is a name I’ve used for many years while DJing and stuff.  But writing this album – my first album, in fact – really came as a happy accident. I basically woke up in the middle of the night in November of 2011 with a melody in my head and i grabbed this old guitar from the ‘20s I had just bought and just droned a D chord underneath and sang along. I wrote the words in the same setting (in bed) that night.
Definitely influenced by my girlfriend at the time, the song is “You Never Liked The Way You Left Home” and that was the first song that eventually became part of Divorce Pop. I took that tune and pieced it together over a few late night sessions at my best friend’s/longtime producer of my projects Adam Lasus’ poolhouse. That’s how the whole record was recorded. We probably worked on the record in 40 or 50 late night sessions just like that. I was writing while on tour with Ben Harper, in hotels, and then recording during my down time. All in all, it was about a year and a half process.
What was the most difficult song to take from the initial writing stage through recording and mixing?  Why was it so troublesome?
“Look of Leave” was probably the most difficult song to take from writing to recording. Like a lot of my songs, it was written on guitar, but I knew I wanted it to be synth based. I struggled with that for a while before I wrote the bass line and then it sort of fell into place I guess. I had a totally different, pretty poppy lyric melody recorded for months on it before I realized that it needed to be dustier and dreamier. So I turned up the smoke and then it got better. I think. I wanted the end ambient part to feel really hypnotic and I wanted it to come really early in the record so that the uneasy feeling is right off the bat. Divorce Pop on Robitussin.
Which of the songs on the record is most different from your original concept for the song?
The song “Rochelle and Connie” was intended to be a big jangly acoustic strummer style of a tune, like Paul Westerberg or something.  But when I got into the studio with Adam, he suggested getting a gnarlier guitar tone and that made all the difference. We didn’t use any guitar amps on the album at all. We merely just plugged crappy guitars into shittier pedals and then right into the soundboard. Everything was recorded on the couch at 4 am afterall…Once we got that initial tone, the song pretty much made itself. Now when I hear it, it reminds me of Steely Dan meets California Games Frisbee level. And that’s probably my favorite feeling on earth.
Did you have any guest musicians play or sing on the record?
The album is about 98 percent me playing and Adam recording in the poolhouse, but there are multi-homies on the record. Musician/producer Chris Cosgrove (of Future People) gets down with his mouth voice on “Motorcycle Rolled”. Danny Kalb (who’s made incredible records for Beck and Ben Harper and many others) also recorded and produced that song. Justin Pate (a longtime friend and music colleague) is singing background vocals on “Sadie”. That song also appears on this pretty rare tape pressing (out on Pour Le Corps and DDM Records) and it features two rap verses by my favorite LA MC called Micah James. His mixtape is coming soon and it’s so crazy. I tried to get Toni Braxton but she didn’t return my page.
I’m also doing a covers project with different female artists where we do duets of old pop tunes and stuff. So far I’ve got “Nite and Day” with Jenny O and now I’m working on “Damn I Wish I Was Your Lover” with the artist JAN.
What input did Lasus have that changed the face of the record?
I wrote the tunes and played the tunes on this album, but Adam is as much a part of this record as I am. It sounds funny, but the thing that stands out most about the album, at least to me when I listen to it, is that you can hear the sound of me and Adam just hanging out and having fun. We didn’t even set out to make a record and I hope that you can hear that, I hope that comes through in addition to whatever depth or dimension may be there also.

Is there an overarching concept behind your new album that ties the record together?
I think maybe there are two. On the surface, or more technical side, there was a specific aesthetic in mind when we made the album. We wanted it to have a vibey, but unsettling feel. A combination of shitty high school black light bedroom meets LA poolhouse. We didn’t use cymbals on the album and instead used white noise from old synths. Our word for the sound is dust. In the way that Mad Lib records can sometimes sound like a dirty desktop…we wanted that, but in a pop way.
I think the deeper concept is the idea behind Divorce Pop. Imagine driving around with your mom in a shitty Oldsmobile, you’re nine-years-old and its 100 degrees. You’re pissed because your favorite GI Joe (or My Little Pony) is trapped under the back seat. You’re driving to pick your older sister up from her gymnastics class. You’re siked because you’re going to Long John Silver’s later. Phil Collins “Sussudio” is on the radio. Divorce Pop is the musical version of that. I hope.

Have you begun playing these songs live and which songs have elicited the strongest reaction from your fans?
We play the songs live yes. Son of Stan is, in studio, by definition, a “solo project”, which has allowed me to unfold it in a live setting in lots of different ways. I’ve had as many as seven people on stage for a show, but the core of it and what I think is the heart of Son of Stan is when its performed as a duo. That’s when it’s most live. Me and a drummer. I’ll typically play guitar and sing while either Dan Marcellus or Brian Garcia on drums.
Lately on some stuff we have been double drumming. Sometimes we’re joined by Ronnie Heart (ex -Neon Indian) on guitar to get a little loose and that’s my shit, but I think the fire of this band live comes as a duo, at the core. We sort of reach a full climax with the song “Sadie”…I sort of tend to lose myself by the time we get to that part of the show. That feeling is what you hope for, but that you don’t know you’re going to feel when its two years before and a melody wakes you up in the middle of the night.
(Visit Son of Stan here:
Facebook:https://www.facebook.com/sonofstanmusic
Website:http://www.thesonofstan.com/
Twitter:https://twitter.com/thesonofstan)