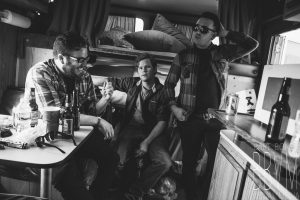 New Jersey-based, controversial, gruff-punk band The Moms released their debut album, Buy American, on September 23 via Paper + Plastick Records. The Moms tread the thin line between shameless idiocy and dark humor, at times seeming to test the boundaries of the first amendment. The NJ drunk-punk trio’s first full length record is a testament to that fact.
The genre-bending album’s socially charged prose touches upon subjects such as prescription drug abuse, private bomb brokers, joining the navy, and the potential for a better post-apocalyptic U.S.A. With the release of Buy American, The Moms will be touring, promoting their loud blend of sweat and satire, as well as a penchant for live performance and drunken debauchery.
Ghettoblaster recently caught up with Jon Stolpe to discuss the record and this is what he said…
When did you begin writing the material for your most recent album?
Some of these songs date back to late 2010/early 2011 when we started jamming together again. Others came about between then and June of 2013 when we recorded Buy American and consequently, Blow Me, the B-side EP to Buy American. This record is basically the first year and a half of being The Moms, rolled up into a 30 minute burrito of rock and roll.
What was the most difficult song to take from the initial writing stage through recording and mixing?  Why was it so troublesome?
“NJ Transit Blues” and “Front Row Tickets To The Cockfight” gave us a hard time for a while. I guess this could be attributed to how intense these songs are, therefore making them exhausting to repeat in practice. Which of the songs on the record is most different from your original concept for the song?  None of them are too far off from the original idea, really.
Did you have any guest musicians play or sing on the record?
No, but we did take a stab at being our own brass section. A very painful stab.
Who produced the record?  What input did that person have that changed the face of the record?
John Collura produced the record. And by produced I mean he showed up each day, ordered lunch, and broke us down emotionally like a peewee football coach.
Is there an overarching concept behind your new album that ties the record together?
No, but there are reoccurring themes.
Have you begun playing these songs live and which songs have elicited the strongest reaction from your fans?
We’ve been playing some of these songs since before they were even recorded. Previously unreleased songs like “Dwyer’s in The Navy Now” and “Whiskey Showers” have always been well received at shows. I think we even played “Dwyer” on our very first tour in the summer of 2012.
(See and hear The Moms here:
“Miss America” video premiere: http://propertyofzack.com/post/91069072979/poz-video-premiere-the-moms-miss-america
“Business is Booming” track premiere:  http://newnoisemagazine.com/exclusive-song-stream-moms-business-booming/ )