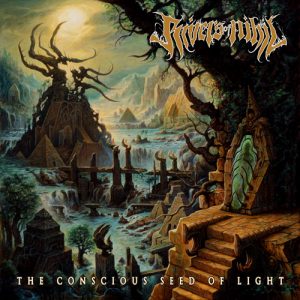 The Conscious Seed Of Light

Born from the ruins of their decaying hometown of Reading, Pennsylvania, Rivers of Nihil are on a relentless path of taking their music to the next level. Formed in 2009, the modern progressive death metal quintet’s music is as dark and heavy as the coal and iron their home city was built upon, taking influences from some of death metal’s heaviest, most abrasive hitters: Morbid Angel, Gojira, Spawn of Possession, and Decapitated, to name a few.
In March of 2013 they entered the studio with death metal master Erik Rutan (Hate Eternal, ex-Morbid Angel) at Mana Recording Studios (Cannibal Corpse, Goatwhore, Exhumed) in St. Petersburg, FL to begin the recording of their first full-length album and Metal Blade Records debut, The Conscious Seed of Light. The Conscious Seed of Light hit streets in North America on October 15 and followed with touring in support of the album with Wretched, Exhumed and Devourment to name a few.
Ghettoblaster recently caught up with guitarist Jon Kunz to discuss the album.  This is what he told us.
When did you begin writing the material for your most recent album?
As a band, we are always writing, so there’s no real definitive answer as to when the writing began. I guess the best answer would be after the release of our second EP we knew we had to try and write an album, because it was something we had not done.  We did it for ourselves though; there was no label interest or anything at that point in time.
What was the most difficult song to take from the initial writing stage through recording and mixing?  Why was it so troublesome?
“Soil and Seed” was such a pain in the ass to record. It is the easiest song to play on the entire album, but keeping our guitars in tune was such a nightmare since we’re tuned down quite a bit. Originally, the main riff was octave chords, but even after getting our guitars professionally set up, they would just not stay in perfect tune. We ended taking hours just messing with tuning, so we said fuck it and changed it to power chords. That was incredibly frustrating. The easiest song took the longest to record!
Which of the songs on the record is most different from your original concept for the song?
Again, I’d say “Soil and Seed”, and it really is not that much different, just a different way to play the riff. Same notes, same feeling, just different. Every single song was completely done by the time we went into record, so there were no changes in the studio besides little things such as the “Soil and Seed” problem.

Did you have any guest musicians play or sing on the record?
We did not, it is all us homeboy.
Who produced the record?  What input did that person have that changed the face of the record?
Erik Rutan produced the record. He worked our asses off, but we needed it. What we got was an album we’re all proud to say we’ve completed. Erik’s intensity all made us infinitely better musicians, and changed the way we view music and record now. We’re all very thankful for that.
Is there an overarching concept behind your new album that ties the record together?
The album is the first of four “concept” albums tied together through the seasons. I use the word concept here loosely, as there is no set story, you can jump around and still get the idea. Rather, we use the seasons as a reference point between future albums, as well as conveying a certain emotion. The first album is Spring. Things are coming to life, as we also are being a new band in the public eye. Not all is happy go lucky though, there is still that melancholy lurking in the background if you dig really deep into the songs and lyrics.

Have you begun playing these songs live and which songs have elicited the strongest reaction from your fans?
Yes we have. Our set has been entirely new songs from the album since we began touring on it this past Summer. Before the album even came out, we’ve been receiving very good responses to the whole set. That has been amazing. I’d say every song offers something different to the listener, but ending with “Soil and Seed” seems to be a popular one so far for the crowd.  Nothing beats a good old heavy groove like that song.