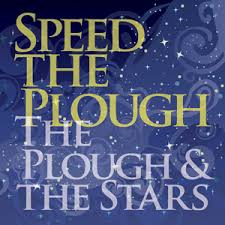 The Plough & The Stars

In the interest of covering as much magical musical ground as possible, Ghettoblaster employs a few reoccurring stock features that allow us to touch base with a band or artist casually and on a time table that works for both them and us.  But, on occasion, the fact that From The Horse’s Mouth is a “stock feature” and the questions are not one size fits all becomes glaringly clear.  And it did while working coverage of The Plough & The Stars, the retrospective of New Jersey’s Speed The Plough.
Originally emerging from The Feelies offshoot the Trypes, this collective have spent the last 30 years delivering songs that are equal parts homespun and cutting edge.  In September, Bar/None released the collection in a limited edition of 500 copies.
Ghettoblaster recently caught up with first generation Speed The Plough member John Baumgartner to discuss the collection, and he answered the ill-fitting questions with the skill, grace and consideration of a gentlemen and pro.  This is what he told us.
When did you begin writing the material for your most recent album?
Well, that’s a pretty loaded question since our most recent release, The Plough & The Stars, is a retrospective of our 30 years of making music. I’d say 32 of the 38 tracks in the project were written between 1984 and 1995, and were originally recorded during that period on four albums and a number of radio performances. The other six tracks are an EP of current material, Tag Sale, which occupies one side of the 12″ LP that’s part of the package. Almost all of those songs were written in the last year, a few of them the first collaborations with my son Michael, who’s our lead guitar player.
What was the most difficult song to take from the initial writing stage through recording and mixing?  Why was it so troublesome?
Of the Tag Sale songs, I’d say that “Labyrinth” was the thorniest. It’s an older song that we hadn’t brought together enough in the past to consider recording, I guess. But we picked it up again and it started to resonate. Then, Toni suggested a string trio for the recording and set out to write the parts. While we had used violins at various points over the years, they were soloing instruments. This was something more ambitious. She labored over it for weeks and when we drove over to the city to record it one Saturday she was as nervous as a cat. Well, I think it was around five or six takes, most just to smooth out some of the edges, and it turned out beautifully. As the songwriter, it was a trip to see an important component of the song become a little classical arrangement played by well-trained players like they had been playing it all their lives. Bravo, Toni.
Which of the songs on the record is most different from your original concept for the song?
Considering the previous question, that’s easy. “Labyrinth.” It was one thing for many years. Then it became something different and so much better.
Did you have any guest musicians play or sing on the record?
Let’s see. Where to begin? The compilation CD includes contributions by Bill Million of The Feelies on guitar, Lois DiLivio on violin; NPR Mountain Stage guitarist Michael Lipton on a bunch of songs, banjo genius Tony Trishka, Blood Oranges mandolinist Jimmy Ryan, and Feelies drummer Stanley Demeski, who was also a band member for a time. Guesting on the current Tag Sale songs are violinists Eric Xu and Aled Roberts, cellist Kristine Kruta, and our current bassist Cindi Merklee on vocals, and our current drummer John Demeski on percussion. Confusing enough?
Who produced the record?  What input did that person have that changed the face of the record?
Bill Million produced the first two albums represented in the compilation and I think he set the course for the band for many years to come. Some of us played in other bands with Bill so we had a shared sensibility about music and that made for a really comfortable recording environment. And he showed us the importance of attention to detail. The band produced the next two albums with engineering guru Don Sternecker, who recorded the first four albums, pretty much honing Bill’s approach as we became better musicians. The latest music, Tag Sale, was produced by second generation member Dan Francia, who did some production work on the latest Feelies album, bringing the whole thing full circle.
Is there an overarching concept behind your new album that ties the record together?
The new album part of the package, Tag Sale, has a real simple concept. Every song has a “tag” of some sort, up front or at the end, that shifts the gears a bit.
Have you begun playing these songs live and which songs have elicited the strongest reaction from your fans?
We’ve been playing pretty much everything, although we have yet to work out a live arrangement of “Labyrinth” without the string parts. We’ll have to re-imagine it again. The songs that get the strongest reaction? The ones we play from the heart. Yeah, corny, I know.
(Visit John and his wonderful band here: http://www.speedtheplough.com/.)