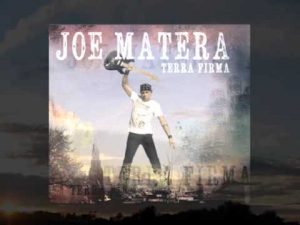 Following a successful 2012, which saw the release of his acclaimed album Creature of Habit, Australian guitar hero Joe Matera is set to release his new album, Terra Firma, via W.A.R. Productions in November.  The album features nine new songs that display greater depth, maturity and emotive resonance than his previous effort.
Principally known as a creator of guitar-driven instrumentals, Matera responded to calls from his fans for more vocals and responded in kind with “Shining Star” (below) and “Tell Me Why”.  Matera is preparing to take the album on the road in May 2014 with a European tour that will include shows in Austria, Germany, Netherlands, and the UK.
But first, Ghettoblaster caught up with Matera to discuss the record.  This is what he told us.
When did you begin writing the material for your most recent album?
I began the writing sessions while I was on tour in Europe in September of last year (2012). The first song I wrote for the new album was ‘Brick By Brick’. It was written and demoed in the living room of my European label’s boss Alex Wieser’s home. Then when I returned back to Australia, I worked on another new song called ‘Shining Star’, the new vocal single off the new album.  The rest was a consistent, but slow, process, due to the fact a lot of personal things were happening in my life too (not the least of which was the death of my father) which affected and eventually seeped its influence into the album.
What was the most difficult song to take from the initial writing stage through recording and mixing?
It was ‘Reverie’. I wrote the instrumental with a distinct musical idea in mind, one that would incorporate a spirit of old school surf guitar blending in with some tasty modern rock elements.
Why was it so troublesome?
Because achieving what I had envisage was no easy task, but in the hands of my capable co-producer and sonic craftsman extraordinaire James Strickler, he took it upon himself to deliver what I was hearing in my head, which believe me, was no easy feat. But he did it, and weaved his studio expertise and shaped the tone and sonics to how I wanted them and how I heard them in my head. I have so many ideas in my head and hear sounds that I want to be able to express, but usually brining those out into the real world, is another story and process all together.
Which of the songs on the record is most different from your original concept for the song?
It would be ‘Tell Me Why’. Originally I wrote and demoed the song as an acoustic vocal song, a slow burner of a song that kinda had a Neil Young vibe to it. It is the most darkest song I’d ever written, and with what was happening in my personal life, it was appropriate to include it on the album, as it was written about a time in my life when I was at my most fragile and lowest. Eventually I turned it into the final version I recorded which had by then morphed into this big rock power ballad.
Did you have any guest musicians play or sing on the record?
The core band on this album is basically myself on all guitars and vocals and American James Strickler who played bass and drums. James has been with me since my first EP Slave To The Fingers and we’ve developed a great working relationship as well as friendship over time.
But to answer your question, yes, there are some great guest musicians. I am quite honoured to have Pete Lincoln from The Sweet play bass on ‘Shining Star’. I recorded two versions for this album, a full band, rock radio friendly version and a more laid back acoustic version. Pete plays bass on both while on the acoustic version Martin Bullard from Smokie came on and played keyboards on the track.
Who produced the record?
It is co-produced by myself and James, who really excelled himself on this album. Not only did he co-produce it, he also mixed and mastered it too.
What input did James have that changed the face of the record?
As I mentioned he had a lot to do with the shaping of my guitar tone and bringing to life what I was hearing in my head as well as the superb work he did in the mixing process.
Is there an overarching concept behind your new album that ties the record together?
Yes, from the cover to the music within, it’s about how life can throw you a curve ball at times and that you need to be standing on solid ground (which is why its titled Terra Firma) and to be able to face what it is head on, and have the strength not get swallowed up by it all and lose your footing. If you stand firm and confidently, then you’ll be able to roll with the punches. It’s also about how life is not always black and white but many shades of grey, and it’s up to us to find that balance.
Have you begun playing these songs live and which songs have elicited the strongest reaction from your fans?
I did a Melbourne (Australia) show recently and played a few new songs live, and they were well received, but the one that is getting the most reaction is the vocal track and first single ‘Shining Star’.