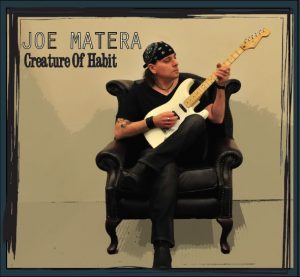 Instrumental melodic rock fans rejoiced in September 2012 when renowned guitarist Joe Matera unleashed his new album Creature Of Habit via W.A.R. Productions in Europe and Mercury Fire Music in Australia.  It caught Ghettoblaster’s attention when we realized Fred Mascherino (The Lemonheads, The Color Fred, Terrible Things) contributes a stunning guitar solo on “Endless Summer.”  The Australian native has built up a fine body of work, following in the tradition of fellow instrumental artists such as Joe Satriani.
Ghettoblaster spoke with Joe Matera about the record and this is what he told us about making Creature Of Habit…
When did you begin writing the material for your most recent album?
I began writing the material for the new and latest album Creature Of Habit in late 2011 after the release of my first EP CD Slave To The Fingers. It took several months of refining the song writing of the material before I felt it was ready to begin tracking the new album proper.

What was the most difficult song to take from the initial writing stage through recording and mixing? Why was it so troublesome?
There was nothing really difficult about any of the songs though I am very particular on the song writing front especially when it comes to the guitar lead melodies. To me these are vital as they are the “voice” of the songs, the ones that will connect with the listeners’ ears so need to be the best I can make them.
Which of the songs on the record is most different from your original concept for the song?
‘The Seeker’ was one track that evolved into something different.  Initially, I had the main melody written and demoed, but it was too short so I kept working on it and eventually wrote another part to it.  Then one morning I woke up with the idea of adding an orchestral section to it.  I invited a talented multi-instrumentalist friend of mine in Germany, Janos Krusenbaum, to play piano and the orchestral elements that are heard at the start of the track.  The song has completely changed from how I originally envisioned that it would sound.
Did you have any other guest musicians play or sing on the record?
Yes, I have a number of very well-known and respected musicians play on my album. Playing bass on several tracks is Englishman Tony Dolan bassist/vocalist from influential black metal band Venom and currently of M-Pire Of Evil. Another Englishman Mick McConnell from legendary English pop-rock outfit SMOKIE plays a guitar solo on the track ‘Outland’, while Rick Brewster from iconic Australian rock band The Angels (better known in the USA as Angel City) contributes a solo on ‘No Way!’ and last and not least American Fred Mascherino (Taking Back Sunday, Terrible Things) serves up a blistering guitar solo on ‘Endless Summer.’
Who produced the record? What input did that person have that changed the face of the record?
I produced the album along with my American co-producer James Strickler who also plays drums on the album. I basically expressed my ideas to James and he would offer me his input and suggestions as well. He brought a lot of the great sonic ideas to the fore, which helped bring my songs to life. He also did an outstanding job in mixing the album. I also consulted with my good friend and legendary U.S record producer Tom Werman (Motley Crue, Cheap Trick) and sent him a near finished version of the album’s sole non-instrumental track ‘Fallen Angel’ for his feedback and opinion, as Tom is and has always been, interested in hearing my musical outings. Tom suggested a number of things to help strengthen the track, one being adding a layer of harmony vocals on the song’s chorus.
Is there an overarching concept behind your new album that ties the record together?
The overall concept, for want of a better word is it showcases the many musical sides to Joe Matera. You have the rocking electric side with tracks such as ‘Slide’ and ‘Endless Summer’, the acoustic and more introspective side that ‘The Seeker’ displays and the singing side with ‘Fallen Angel’. Hopefully it all sums up nicely who I am, musically and as an artist.
Have you begun playing these songs live and which songs have elicited the strongest reaction from your fans?
Yes, I embarked on my first European tour in September/October of 2012 and performed songs off all my two releases. The material was all received and elicited really great responses by the live audiences, so I was very happy with it all, but the one that elicited the strongest response was the sole vocal track off the album, ‘Fallen Angel’. Due to the public response and interest it received, it has been released by my European label W.A.R Productions this month as my new official European only CD single over there.
(Visit Joe Matera here: http://www.joematera.com/home.cfm.)