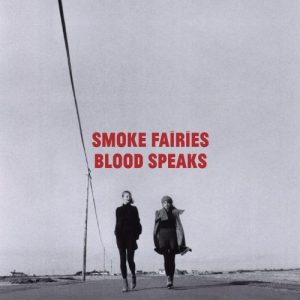 London duo Smoke Fairies release a double CD of early works titled Ghosts on September 30.  This retrospective release features their limited, long-sold-out 7″ singles on disc one – the ‘Frozen Heart EP’, their debut single ‘Living With Ghosts’ (the release that caught the ears of Jack White and inspired him to immediately whisk the band to Nashville to record for his Third Man Records label) and the amazing ‘Sunshine’ single.  CD2 is a complete bonus disc of early studio sessions from 2007–08. These tracks were only ever sold at gigs or have never been released at all.  Included is the sublime ‘Good Man’ along with other early classics, all recorded before their acclaimed 2011 debut album, Through Low Light and Trees.
With tracks produced by guitar virtuoso and frequent Brian Eno and Pulp collaborator Leo Abrahams and with guest performances from Ed Harcourt, to later recordings produced by multi-instrumentalist David Coutler featuring Andy Newmark (Sly and the Family Stone, John Lennon), Al Mobbs (Good The Bad and The Queen, Gorillaz) and long-time Smoke Fairies collaborator Neil Walsh, these recordings document the London duo’s early beginnings.
This collection follows hot on the heels of Smok Fairies’ Blood Speaks LP, which dropped earlier this year.  Ghettoblaster caught up with SF’s Jessica Davies to discuss Blood Speaks and get you acquainted with their latest work before Ghosts drops. This is what she told us about the band’s last proper LP.
When did you begin writing the material for Blood Speaks?
Some elements of some of the songs have been taken from songs we wrote years ago. Others are brand new. We have been writing songs singce we were 13 so there is a whole store of song ideas and tunes that we can recycle. We did a lot of touring around the states and that gave us a lot of thinking time in inspiring locations. many of the songs sprung from that time.
What was the most difficult song to take from the initial writing stage through recording and mixing?  Why was it so troublesome?
“Blood Speaks” was a pretty hard song. It’s over whelming sometime when you think of the infinite ways you could record a song. Blood Speaks was a track we worked and worked on, getting each little bit right. It was a bit like a puzzle.
Which of the songs on the record is most different from your original concept for the song?
Again, I would say “Blood Speaks”. It started off being very guitar orientated but it just wasn’t working. as soon as we took all the guitars out it really sprang to life.
Did you have any guest musicians play or sing on the record?
Our band is on the record playing drums, bass and viola,  but we didn’t get anyone else in to guest on it.
Who produced the record?  What input did that person have that changed the face of the record?
Head produced the record. We worked with him on our debut album  Through Low Light And Trees. When we went into the studio we alrady had rehersed the songs with the band and new how we wanted the songs to sound. Head isn’t really the type of producer who takes a song and completely changes it. What he is great at is capturing the essence of a band and their live performance.
Is there an overarching concept behind your new album that ties the record together?

Not really, We spent a lot of time thinking about the album whilst on tour in the states.
As a result a lot of songs have a transient, traveling theme, but not all of them. On the album there are songs about London, dogs going into space, insomnia, love. We have tried to cover a lot of bases.
Have you begun playing these songs live and which songs have elicited the strongest reaction from your fans?
We have taken the album out on the road and toured with it around Europe and the UK. It’s hard to say which song fans like the best. Every night and audience is different.