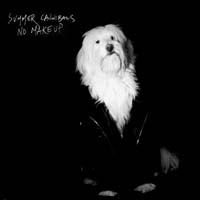 Summer Cannibals follow in the grand tradition of fearless rockers who use fluttering keyboards and expressive voice to get their collective point across.  With hometown rockers like The Wipers and Ther Thermals in mind, vocalist/guitarist Jessica Boudreaux grew with project into a well rounded indie pop outfit with fangs.
The band dispenses 10 songs in under a half hour on their debut, No Makeup, which hits streets via New Moss on August 6,  Ghettoblaster caught up with Boudreaux to discuss it and this is what she said…

When did you begin writing the material for your most recent LP?
I started writing the songs for the upcoming record in October of 2012.
What was the most difficult song to take from the initial writing stage through recording and mixing?  Why was it so troublesome?
The only song that took more than a couple of takes in the studio was “The End”. We didn’t really practice that song before going in. The first minute of the song doesn’t have drums so our recording engineer had to stand to the side with a pringles can waving it up and down to keep us on tempo, which was pretty hilarious.
Which of the songs on the record is most different from your original concept for the song?
We recorded everything live and didn’t make any real changes to song structure or anything while in the studio so most songs are pretty much exactly what I initially intended. All of the songs start a lot slower in my demos though.
Did you have any guest musicians play or sing on the record?
After recording we had to change up our live lineup so Casey and Kyle who were playing drums and bass on the record aren’t playing with us anymore. We miss those two!
Who produced the record?  What input did that person have that changed the face of the record?
We produced the record and Mark Raymond at The Rhombus Room here in Portland was our recording and mixing engineer. He’s definitely got a unique approach to recording bands live so he put his stamp on the album and gave it a feel that we couldn’t have gotten without him. He rules!
Is there an overarching concept behind your new album that ties the record together?
The main concept is just that we wanted to make an album that felt real. We wanted to keep it as close as we possibly could to how we sound live, that’s really important to us with this band.

Yeah, we’ve been playing a lot of these songs since November. I guess “Wear Me Out” seems to get the strongest reaction.