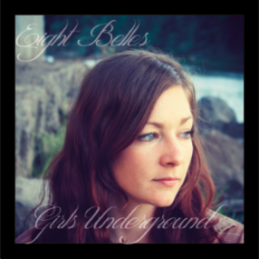 Oakland, California’s Jessi Phillips, the complex and rich voice behind Eight Belles, creates original yet classic-sounding country music that harkens to Patsy Cline, Loretta Lynn and the like, but maintains modernity, holding its own amidst Neko Case, Gillian Welch and Jenny Lewis.  Pretty badass right?  Unsurprisingly, her roots in country began on a farm in Michigan where daddy made his living as a professional country and bluegrass singer, guitarist, and fiddle player.  Though she has worked extensively as a solo performer, her current touring band consists of Henry Aloysius Nagle (of Emily Jane White) on guitar and peddle steel, Christian Carpenter on bass, and Shaun Lowecki on drums.
Eight Belles releases Girls Underground on September 25 and Ghettoblaster caught up with Phillips to discuss the record.  Here is what she told us about it…
When did you begin writing the material for Girls Underground?
It’s my first full-length solo record, so it represents the best of the songs I’ve been writing for the past five years or so. Most were written since I moved to Oakland, California three years ago and a few were written after we’d already started recording.
What was the most difficult song to take from the initial writing stage through recording and mixing?  Why was it so troublesome?
The slowest tunes, “Girls Underground” and “Someday Baby”  were both tricky. They are both really exposed, open pieces which took a lot of patience. There are also some soaring vocals in those songs that I feel like I perform better in front of an audience with my band behind me than I do alone in the studio.
Which of the songs on the record is most different from your original concept for the song?
I’d say “Nolchi.” I’d always pictured it having a more bluegrass Americana feel with mandolin and banjo and fiddle, and no electric instruments. It turned out a lot more pop-y, with prominent electric guitar and a much more reverby, polished feel.
Did you have any guest musicians play or sing on the record?
Ines Beltranena, from Idea the Artist, and John Courage, from John Courage and the Great Plains both sang some harmonies on the record. We also have a beautiful violin solo from Carey Lamprecht, who plays with a number of great acts including Emily Jane White and Jolie Holland. But it was mostly my band: Henry Nagle on guitar and peddle steel, Christian Carpenter on bass, and Shaun Lowecki on drums.
Who produced Girls Underground?  What input did that person have that changed the face of the record?
Ross Harris engineered and mixed the record, and he and Henry and I produced it. It was really a pretty democratic, congenial process. I sort of love the idea of a producer coming in and really putting their individual creative stamp on a record, a la George Martin or Phil Spector, but I don’t currently know anyone to whom I’d turn over the reins like that. Ross, Henry and I all had the same basic vision–a record with a polished but still simple feel, with a lot of room for lyrics and individual performances to stand out.
Is there an overarching concept behind your new album that ties the record together?
There are definitely some common themes in the lyrics: family ancestry, transience, the desire for men who are bad for you, your friends’ desire for men who are bad for them. There are of course the requisite number of songs about failed romantic relationships.
Have you begun playing these songs live and which songs have elicited the strongest reaction from your fans?
Yes, we play most of them live. I’m lucky to have pretty much the same band live that you hear on the record. I love singing “Nolchi” and that’s definitely the song people comment on the most. There’s something about a girl singing the line, “I broke a bottle over your head” that gets people, especially women, pretty excited.
(Check out “Buried Child” from Girls Underground!  Catch the band at the following shows:
10.14 – The Make-out Room – San Francisco, CA
11.02 – Loving Cup Presents at Sausalito Yacht Club – San Francisco, CA
11.09 – Americana Front Porch at The Lost Church – San Francisco, CA)