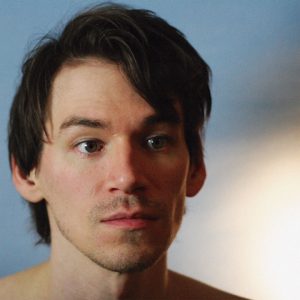 For years, Vancouver multi-instrumentalist Jay Arner teamed up with others to translate the sounds in his head. He fronted an indie rock band, played synthesizers and samplers in a pop duo, manned the drums for a piano-punk songwriter, and held down the bass in a eight-member collective.
Along the way, he’s also become a sought-after producer and remix artist, working out of the legendary Hive studios and recording acts like Mount Eerie, Apollo Ghosts, Rose Melberg, No Gold and many more.
Now, finally, he is going it alone. Every sound you hear on his eponymous debut album — which dropped in June through Mint Records — was self-recorded by Arner in his 72-square-foot practice space using a precariously perched desktop computer and his home recording gear. The sum of his many talents, these 10 songs sizzle with DIY energy and encompass the scope of the songwriter’s diverse resume.
Ghettoblaster recently caught up with Arner to discuss his self-titled LP.  This is what he told us…
When did you begin writing the material for your most recent LP?

Most of the songs are from 2011-2012, but “Bird of Prey” and “Nightclubs” are from 2009. I had never really recorded or released them properly so I tried to do them for this.
What was the most difficult song to take from the initial writing stage through recording and mixing?  Why was it so troublesome?
“Emotional Whiteout” was probably the most difficult– the chords are mostly G D and C– the chords everyone uses! It’s almost a joke, using them. A very satisfying joke.
So originally it sounded really extremely normal. So my thing to do in that kind of situation is mute the things that sound most normal. I took away the strummy guitar and replaced it with 8-ish high-pitched noisy guitars and voilà.
Which of the songs on the record is most different from your original concept for the song?

Again, “Emotional Whiteout”. But really, writing, recording, and mixing are all blended together for me and I never really change them from start to finish. I think all the songs on this LP are built off the original demos. “Emotional Whiteout” just has weirder/more guitars.

Did you have any guest musicians play or sing on the record?
Nope!
Who produced the record?  What input did that person have that changed the face of the record?
I did.
Is there an overarching concept behind your new album that ties the record together?
It’s a solo record in a very complete sense– I made it all and the songs are all personal– so the concept behind it is: “Jay Arner” the person. Not an on-purpose theme but it arises due to the solo-ness of the record.
Have you begun playing these songs live and which songs have elicited the strongest reaction from your fans?

We’ve played all the songs live– I think audiences are into “Broken Glass” the most right now. Smooth funk, that’s what people like.
(Preview a song from the record here: https://soundcloud.com/mint-records/jay-arner-dont-remind-me/.)