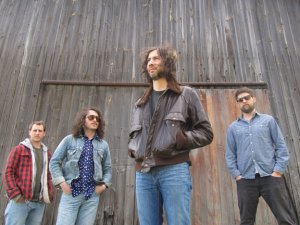 Some people call it a vibe and some people call it a groove.. It’s the sound of Handsome Jack’s album, Do What Comes Naturally, arrived via Alive Natural Sound Records and it is a boogie soul shack shaker.
Produced by Zachary Gabbard of the Buffalo Killers and featuring Bob Nave (of the legendary Lemon Pipers) on hammond organ, among others, the music of this album seamlessly flows through deep dark mid-tempo boogies, smoky upbeat burners, and soulful feel-good rockers all with a natural ease.
The band hails from Buffalo NY and began as a blues garage rock band. After high school they moved out of the garage and developed their sound into a natural soulful boogie that remains rooted in raw blues. They’ve shared the stage with The Sheepdogs, Blue Cheer, Gov’t Mule, J. Geils, The Hold Steady, and Robert Randolph to name a few.
Ghettoblaster recently caught up with Jamison Passuite to discuss the band’s record and this is what he said about it.
When did you begin writing the material for Do What Comes Naturally?
We wrote three songs back in November of last year and demoed them on our old Tascam four track cassette recorder that we’ve had for years.  We forwarded the tracks to Zach Gabbard (Buffalo Killers) who forwarded them to Patrick at Alive Records.  Patrick liked the songs so much he agreed to back a full length record.  So we set the recording date for February, wrote a bunch of songs in the next couple of months, and picked out the top 10 songs for the album.
What was the most difficult song to take from the initial writing stage through recording and mixing?  Why was it so troublesome?
“Leave It All Behind” was a little tricky.  The chord changes are really simple but the main rhythm of the song is a bit quirky.  Plus the vocals on this album, especially this song, are in a lower register than our older tunes.  I had to kind of find my voice again and really think about the vocal delivery.  We made a couple of last minute adjustments in the studio on this one and it went from being an underdog to a song that’s just super fun to play.  I think it emits a different vibe than anything else we’ve written.
Which of the songs on the record is most different from your original concept for the song?
I think “Right On” changed the most from its original concept.  I had this long, weird guitar riff that I loved but couldn’t figure out how to turn it into a song.  We messed with different beats and bass riffs to see what would complement the guitar riff best.  For a while we played a heavier version of it with more of a driving bass line; thinking that the overcomplicated guitar riff needed bare bones bass to keep it grounded.  Eventually we found the perfect combination where each individual part could stand alone, but with their powers combined it turned into a great soulful, laid-back and bad-ass song.  The incredible back up vocals didn’t hurt either!
Bob Nave played on the record?  What did he bring to it.  Did you have other guests?
Bob Nave played Hammond organ on “Leave It All Behind.”  He added just the right amount of color and texture to give the song some depth.  He’s a true seasoned veteran and he knew exactly where we were coming from when we wrote that one.  We had Forest Horn put some awesome harmonica on a garagey blues riff that was practically begging for it.  Also, Kristen Kreft and Beth Harris added back-up vocals on a number of tracks.  We couldn’t have asked for two more soulful sisters than these, so hearing them on the recording was a dream come true!
How did you meet Zach Gabbard and what input did he have that changed the face of the record?
We met Zach Gabbard opening up a show for his band, Buffalo Killers, in Buffalo a long time ago.  We’ve been friends and fans of theirs ever since and we’ve been lucky enough to share the stage with those guys several times over the years.  I can’t say enough about how incredible they are as musicians and people.
We all went into the studio with open minds.  Recording everything in three days and sleeping on the studio floor required us to really let Zach and engineer Mike Montgomery into our little family and we totally trusted them.  Their ears could pick up on certain things I didn’t hear and vice versa.  We all pitched out ideas for parts and went with whatever sounded best to the group.
A perfect example is on the opening track “Echoes.”  I wanted to add some kind of effect at the beginning so I was messing around with some pedals.  I got a crazy feedback loop stuck in an echo pedal hooked up to a tremolo.  Zach and Mike thought it was perfect and I thought it was way too crazy.  Mike ran the amp out into the “reverb chamber” and Zach twiddled the knob on the trem pedal to vary the pulse.  We were unsure about it at first but we trusted them and ran with it.  Now I feel like that crazy effect really makes the song.
Is there an overarching concept behind your new album that ties the record together?
Don’t overthink anything, but think about it enough so it’s good, but sounds like you didn’t think about it.  That’s deep!
Have you begun playing these songs live and which songs have elicited the strongest reaction from your fans?
I would say we’ve gotten the most comments after shows about “Between the Lines.”  It’s probably the catchiest track on the album and everyone seems to dig it!
(Visit the band here: https://www.facebook.com/handsomejackband.)