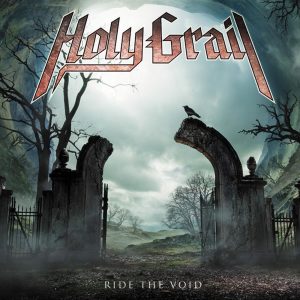 Founded in 2008 after vocalist James Paul Luna and drummer Tyler Meahl (brother of Huntress guitarist Blake Meahl) left White Wizzard, Holy Grail have been cranking out traditional sounding heavy metal that earned the band a Metal Hammer Golden Gods “Best New Band” nomination before they even had an album out.  When they finally dropped their debut full-length, Crisis In Utopia, produced by Danny Lohner (NIN, A Perfect Circle, Hollywood Undead), in the fall of 2010 they landed a spot on Revolver’s Top 20 albums of the year.
New album, Ride The Void, was produced by Matt Hyde (Slayer, Children of Bodom) and mixed by Mark Lewis (Trivium, All That Remains). Alan Douches (Baroness, Mastodon, Firewind) handled the mastering.  Ride The Void sees the addition of guitarist Alex Lee (ex-Bonded By Blood), who joined the band in early 2011 and shares lead guitar duties with Eli Santana, and offers more of the exciting, fist-hoisting modern thrash, NWOBHM, and death sounds fans have come to expect from the band.
Ghettoblaster caught up with vocalist James Paul Luna to discuss the record while he prepared for the bands forthcoming headlining trek (dates below).  This is what he told us…
When did you begin writing the material for your most recent album?

We started writing for Ride The Void between the summer and fall of 2011, but we did have a few songs leftover from our previous album that we never got a chance to get to.
What was the most difficult song to take from the initial writing stage through recording and mixing?  Why was it so troublesome?

“Bestia Triumphans” was hands down the most challenging because it went from a 10 minute opus to a five and a half minute mind-blast. If I remember it was also three different songs at one point that were rehashed and combined into one
Which of the songs on the record is most different from your original concept for the song?
I’d say “Bestia Triumphans” (as I mentioned before), but also “Can’t Hide the Wolf” got a complete overhaul from its original version.
Did you have any guest musician’s play or sing on the record?

Yes, we had a guest cellist on the instrumentals and even our friend Chris Aiken from Strung Out came in and laid down a few bass lines on a song.
Who produced the record?  What input did that person have that changed the face of the record?
Matt Hyde produced the record and his input was huge in the overall outcome of it. Matt has an insane resume and his theory and songwriting chops are top notch so if there was ever a weak melody or awkward transition he was there to smooth it out. He was like a 6th member of the band for this album!
Is there an overarching concept behind your new album that ties the record together?

Overall the theme to the album is about hope and perseverance in the face of adversity. Basically how no matter how much life can suck at times, it could always be worse and you keep pushing down that unknown path even though you don’t know where or how far you’re going. You just keep riding the void.
Have you begun playing these songs live and which songs have elicited the strongest reaction from your fans?

Yeah, we’re playing pretty much all the songs in the album live. The greatest reactions have been from “Crosswinds” and the title track, “Ride the Void.”