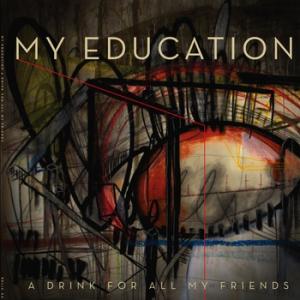 A Drink For All My Friends

Long-running Austin, Texas seven-piece band My Education are preparing to release their sixth album, A Drink For All My Friends, on November 27 in North America on Headbump Records/Haute Magie and in Europe on Golden Antenna. A Drink For All My Friends is the band’s most streamlined and aggressive effort yet, while remaining an entrancing cinematic journey throughout, exploring everything from the final communiques from doomed airline pilots to a frenetic and violent outburst from a laboratory golem.
Since forming in 1999, the band’s membership has expanded and contracted some as they’ve prepared five full-length albums, several singles, compilation appearances, and a 12″ vinyl collaboration with avant-hip hop duo Dalek for public consumption.
Ghettoblaster recently caught up with James Alexander to discuss the bands forthcoming effort.  Here is what he told us about it.
When did you begin writing the material for A Drink For All My Friends?
We started working on this material around the time our record Bad Vibrations was coming out.  The material on A Drink For All My Friends would have come out after Bad Vibrations, but in the meantime we decided we should do a release of our live score to the silent film Sunrise instead.

What was the most difficult song to take from the initial writing stage through recording and mixing?  Why was it so troublesome?
Actually everything on this record came together pretty naturally and without too much fuss.  Partly because we had so much time to work on them I suppose.  We were able to demo everything on the record a couple of times before taking it to the studio.  We were ready to roll when we got there, and recording was pretty much a breeze.

Which of the songs on the record is most different from your original concept for the song?
Maybe “Homunculus” -it was originally written as a sort of dance/grunge thing about 20 years ago!  Recorded on Tascam 4 track with drum machines, synths, guitars and vocals.

Did you have any guest musicians play or sing on the record?
We were lucky to have frequent collaborators Sarah Norris and Henna Chou on board for this recording.  As well a special appearance by our good friend and former bandmate, keyboardist Kirk Laktas.  We also got a surprise drive-by saxophone solo from an amazing cat named David Samartin.  He’s the real deal.  He ripped out one of the most awesome scronk solos you’re gonna hear – in no time flat.

Who produced the record?
We always self-produce, but with the able input of people like Frenchy Smith and Alex Lyon at the Bubble.  We like working this way.  It allows a kind of ‘production by consensus’ where we have several people talk through ideas before settling on the one that everyone agrees is the best.

Is there an overarching concept behind your new album that ties the record together?
Not a concept per se, but three of the songs are either dedicated to or about specific people that we’ve known over the past 11 or 12 years; people that for one reason or another we decided we wanted to raise a glass to.

Have you begun playing these songs live and which songs have elicited the strongest reaction from your fans?
We’ve been playing most of this material live, and some of it for quite some time now.  “Roboter-Holenbewohner” (dedicated to our friend, the late Jerry Fuchs) is definitely the one that brings people to a frenzy.
(Visit the band on the web here:
www.myeducationmusic.com
facebook.com/myeducationmusic
myeducation.theloyaltyfirm.com/)