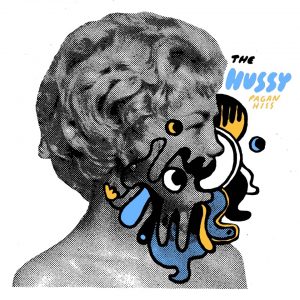 Some bands are heady and cerebral, expecting audiences to stand thoughtfully with arms crossed quietly enjoying their music.  Others deliver bash-em-up-spit-em-out garage rock trash for listeners with short attention spans and inducing crowd-surfing, beer spilling and pogo dancing.  Madison, Wisconsin’s The Hussy, a male/female duo, have been cranking out infectious two-minute blasts of shrieking, spastic guitar, and rhythmic punches since 2008.  Last March they released their sophomore LP, Weed Seizure, via Tic Tac Totally records, which was celebrated by critics far and wide.  That record followed a highly successful debut (Cement Tomb Mind Control in May 2011), which sold-out in under a year.
The forthcoming album, Pagan Hiss, which is expected to deliver the crude force of bands like The Oblivians, while retaining pop centrism of artists like Ty Segall Jay Reatard drops this May 7 via Southpaw Records.
Ghettoblaster recently caught up with Bob and Heather Hussy to discuss Pagan Hiss.  This is what they had to say about it…
When did you begin writing the material for your most recent album?
Heather: Some of the songs on the record are a couple years old by now I think! Like “Blame” for sure. Some of the songs, like “Zummer,” were written in the last few months or so.
What was the most difficult song to take from the initial writing stage through recording and mixing? Why was it so troublesome?
Bobby: Most of the songs were pretty straight forward. I’ve recorded the last two LPs before this one and Heather and I have a really good relationship that makes recording easy and fun. I would say the song “Zummer” has a lot of mixing on it because it features two guest spots that I recorded on different dates from the initial recording of the track. There’s an unreleased song from the record called “Zimple Timez” that I spent a really long time tinkering with both in the recording and the mixing process. Ultimately we nixed it from the album but I think it will still see the light of day on some release in the near future.
Which of the songs on the record is most different from your original concept for the song?
Bobby: “Rezhand” came out super minimalist and I like that. I also like that about “Dead To Me” and “HOC.” Originally I had seen these songs as grand compositions with a lot flying around but as we started to track ‘em we liked how they sounded minimal and to the point. We just wanna let the song shine through without any tricks flying in or out (even though “HOC” has a couple of tricks up its sleeves!)
Did you have any guest musicians play or sing on the record?
Heather: We have our good friend Dead Luke play some guitar up on this thing. We also have our friend Jordan Davis from The Mystery Girls play organ as well.
Who produced the record? What input did that person have that changed the face of the record?

Heather: The record was co-produced by both me and Bobby and our longtime producer, Bert Roberts. Bert is pretty easy to work with for the most part, and pushes us for the best takes possible. He’s a swell dude.
Is there an overarching concept behind your new album that ties the record together?

Bobby: I don’t know if I’d go as far to say that. I definitely think there are concepts throughout it, but I’d rather let the listener find those for themselves instead of us telling them what they should be looking for. I think our records always have consistent plot points but it’s nothing we’re digging too deep at. We just write the songs that we’re feeling at the time and by way of nature you’re going to end up with songs that fit together like a puzzle. If you pick songs from five years ago and record them with songs from right now they’re going to sound and feel way different. Which can actually work well as well, but for the most part we like to get songs out in a group and really focus on getting it done so we can move onto the next project. We’re always thinking of the future.
Have you begun playing these songs live and which songs have elicited the strongest reaction from your fans?
Heather: We’ve been playing a few of these new ones live, and they are going over well with everyone.  Some people know some of the words already so that is a good sign.
(Visit The Hussy at Facebook here: http://www.facebook.com/#!/thehussyknowsall.)