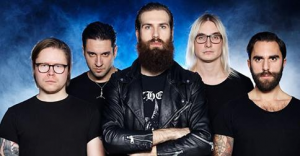 Swedish skate punks Atlas Losing Grip will release their long awaited new LP Currents in North America on January 16 via Creator Destructor Records.Sons of the southern north, Atlas Losing Grip have tempered Sweden’s melodic punk rock heritage with a burning love for the grandeur and power of heavy metal, paying harmony-enriched homage to idols Iron Maiden and Metallica.
Musically infectious, Atlas Losing Grip explores mortality through a denial of all that holds back the human mind and body – including both religious dogma and minimalist limitations inherited in punk rock. The band has continuously challenged themselves musically throughout their career, and Currents is no exception. From note one of the album, it is clear that the other four members of Atlas Losing Grip have evolved and progressed in their love for heavy metal by infusing even more harmony-laden guitar work and technicality into the ripping and furious punk rock structures that keep their sound grounded, without ever appearing ostentatious.
Ghettoblaster recently caught up with Gustav Burn to discuss the record and this is what he said about it.
When did you begin writing the material for your most recent LP?
Oh that was pretty long ago. I actually found a videoclip on my old macbook the other day, and the earliest demo of a song that ended up on Currents dates back to 2010 actually. A song that never went onto our last album State of Unrest (2011) is the track “Downwind”, then there’s some demos from 2011-2012 and riffs that eventually ended up on Currents. So it’s been a long process for sure!
What was the most difficult song to take from the initial writing stage through recording and mixing?
From the top of my head I would say “Ithaka” of course, since it’s a long song, and the entire outro was actually “built” in the studio where we just started out with the acoustic guitars, and went from there to build up this massive outro with mandolins, piano, guitars and melodies and vocals and vocal harmonies that in the end fades out and ocean waves fade up, just like the album starts.
Why was it so troublesome?
Well, the song is 10+ minutes long and consists basically of three parts, an intro, the song and the outro, and to tie it all together and not make it feel like a 10 min+ song was not hard, but a challenge. A fun challenge though. I’ve heard a lot of people say that, no way this song is 10 + minutes, it just reels you in and then its finished. That’s a good sign I’d say!
Which of the songs on the record is most different from your original concept for the song?
“Take The End” for example. We only had this organ part that Rodrigo had written, and at first we made it a fast song, but then we just stuck with the slow intro and made it into a half tempo banger instead.
Did you have any guest musicians play or sing on the LP?
Yes! My friend Max Sommerstein plays the grand piano (a 1920 steinberg) on “Cold Dirt,” and another friend named Sverker Zadig plays the Cello parts on “Cold Dirt” and “Closure,” and yet another friend named Josef Sjöberg played the trumpet on “Kings and Fools.”
Who produced the LP?
I did, with the rest of the band and a friend named Mattias. It’s all a DIY production, we do everything by ourselves, I engineered, recorded and co-mixed it. We like to control everything ourselves, and we are so confident in what we do, so we don’t feel like we need someone to come in and tell us what to do with our music. We might do something very different another time, I don’t know. Just for the fun of it. Try something new you know!?
Is there an overarching concept behind the new LP that ties the record together?
There is. The first lyrics that was written was “Unknown Waters,” which held a lot of references to water, and from there it went. I suppose it was easier for Rodrigo to write the lyrics when he limited himself inspirationally to a concept, and there it was, the semi-theme that is somewhat of a ocean-theme. I wouldn’t call it a concept record, but it really ties the record together, you know.
Have you begun playing these songs live and which songs have elicited the strongest reaction from your fans?
We have! We’ve played “Cynosure” live this year, and “Unknown Waters” once or twice as well.
On the record II believe “Shallow,” which is the first single off of it has gotten the strongest reaction, and appreciation.
(Visit Atlas Losing Grip here: https://www.facebook.com/atlaslosinggrip.)