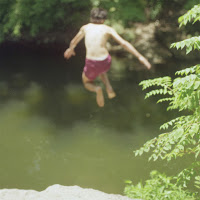 Connecticut’s The World Is a Beautiful Place & I Am No Longer Afraid to Die speak to a universal experience: of home, of suburbia, of community, of nostalgia for a time not so long ago after all. Atmospheric and breathy, emotionally raw and heavy, The World Is’ reputation as one of today’s seminal “next-waver“ emo bands precedes them.
The band’s highly anticipated Whenever, If Ever hit the streets via Topshelf Records recently and Ghettoblaster caught up with TWIABPIANLATD’s Greg Horbal to talk about it.  This is what he said…
When did you begin writing the material for your most recent release?
We finished recording our last record Are Here to Help You in May or June of 2011. The first song ever demo’d for Whenever, If Ever was done in July of that summer before we left for a short midwest tour. Writing continued until the LP was done being recorded in February of 2013. I don’t think we’ve ever gone into recording a record with everything finished, but I don’t think any of us have ever worked for so long on a single project like this record.
What was the most difficult song to take from the initial writing stage through recording and mixing?  Why was it so troublesome?
The last song on the LP, “Getting Sodas,” without a doubt took the longest. We recorded the first demo of the song in May of 2011, and kinda threw it on the back burner until the following year. We were originally planning on including it as a track on the Mixed Signals comp Run For Cover Records did in the Fall of 2011, but decided we still had a lot of work to do on it.  We reworked a lot, got frustrated and sat on it again for a long time.  We actually didn’t finish the instrumentation until the night before we entered the studio. The vocals were just as big of a nightmare. We were all really at a loss about what to do with the post rock build up at the end, but it all kinda came together as we started to run out of time. Despite the hassle I think it’s my favorite song on the LP now.
Which of the songs on the record is most different from your original concept for the song?
Most of the songs really didn’t change as we crafted them. “Low Light Assembly” wasn’t originally included on the LP. We had written a heavier song titled “The Last Clippers Show” that we all agreed flowed with the rest of the LP. That being said we were having a really, really hard time getting vocal parts together for it. We talked about just scrapping the song, and leaving side b of the LP as just three songs until josh showed us the basic structure of “Low Light Assembly.” We all helped fleshed it out and I think I’m honestly a lot happier with how this song sits on the LP then “The Last Clippers Show” would have. We’re still planning on figuring what we’re gonna do with that song.
Did you have any guest musicians play or sing on the record?
There were 10 people who performed on Whenever, If Ever. I wouldn’t really call them guest musicians since everyone helped craft the record in one way or another, but not everyone who recorded on the LP is going to tour with us.

Who produced the record?  What input did that person have that changed the face of the record?
We didn’t really go into the record with a producer, but the engineer who recorded and mixed the LP landed us a big hand in making the record into what it is. We recorded our last record with Ryan Stack who works out of Format Audio in Haverhill, MA. Dude really became a part of this LP and I don’t think we would have been as happy with how it came out if we had gone elsewhere.
Is there an overarching concept behind your new album that ties the record together?
We made a real conscious effort to be self-referential throughout this LP. Lyrics reappear from of our previous efforts. We made a really strong effort to make sure the record flowed so it could be viewed as a single entity. I think we’re more or less happy with how it all came out.
Have you begun playing these songs live and which songs have elicited the strongest reaction from your fans?
We’ve started to play a lot of the LP live! There are a few songs we need to work on still but we’re planning to have them down before we leave for our U.S. tour on June 11. I really don’t know which songs people like the best yet because they’ve only had them for a week or so! Hopefully they like all of them!

Tags: The World Is A Beautiful Place (And I am No Longer Afraid To Die), Topshelf Records