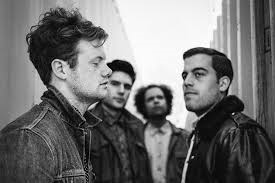 Since the band released their debut EP, Rebel Hill in 2012, Vinyl Thief has been taking their insanely kinetic live show on the road, playing shows as direct support for The Joy Formidable, Little Green Cars, Wild Cub and Youngbloog Hawke. They released their first new song off the upcoming Stop Motion EP, “Smooth”  in August 2013 to much buzz on the Hype Machine charts. The Deli Magazine urged its readers to “admire how gloriously schizophrenic that song manages to be.” Recognized by Paste Magazine as a “Band You Need To Know Now,”  the band’s vintage Cold War Kids meets  M83 sounds have also landed them on VICE’s NOISEY.
Ghettoblaster recently chatted with the Vinyl Thief’s Grayson Proctor about their forthcoming EP, which drops on February 4.  This is what he said about it.
When did you begin writing the material for your most recent EP?
All four of these songs actually came to be at very different times. “Faces” is one that has been with us for a while now.  “Slow Down” has been around for about two years or so, but it sat unfinished for a while. We came back to it randomly one day and it really just exploded. “Smooth” and “Stop Motion” both came about in the past year, when we got into the studio we put them together.
What was the most difficult song to take from the initial writing stage through recording and mixing?  Why was it so troublesome?
The title track, “Stop Motion,” was really difficult. We had one piano part, and an outrageous synthy-brass sound, and had no idea how to make a full song out of it. Some songs are really far along and well formed before you go into the studio to record, and then some you write almost right there on the spot. “Stop Motion” was the latter. We had really been struggling to put the pieces together on this one. Then, our producer was getting some really weird drum tones and running them through my MS-2000 synthesizer, and suddenly the groove and rhythm caught all of our ears and it kind of took off from there. But it took a while before we got it to that point.
Which of the songs on the record is most different from your original concept for the song?
“Smooth,” by far. It’s completely different from our original demo of the song. We had a short, synth bass loop, and that was going to be the basis for the whole song. We were trying to write a very minimalist, bare-bones structure and song. Eventually, we just didn’t feel any attachment to the direction it was headed. So, naturally, we took it the opposite way.
Did you have any guest musicians play or sing on the record?
On “Stop Motion,” there is a triangle loop in the choruses that our friend and master-percussionist Josh Minyard played. There’s a lot more of his handy work on songs to come. We had him come over one day and just told him to bring everything he had. It was an entire truck-load of percussion instruments. So we went through and tried out a lot of different things.
Who produced the record?  What input did that person have that changed the face of the record?
One of our best friends, Ben Treimer, produced the record with us. He’s been in a studio his entire life. His uncle was a big pop producer, but Ben is very organic. He really latches onto soft, subtle sounds and melodies, which is opposite of our natural tendency. It was a really good balance. While we usually focus on our main at any certain point, Ben thinks about what is going to affect the listener’s sub-conscious, which is a huge influence.
Is there an overarching concept behind your new EP that ties the record together?
The EP is about escaping. I guess it starts with running away from your problems, and then ends with kind of taking a step back and taking stock on what’s happened. So the EP is the escape, and the full length coming out later on will find more of a resolve I think.
Have you begun playing these songs live and which songs have elicited the strongest reaction from your fans?
Some of these songs we have been playing live for a while now.  Since we’re relatively new at this, we figured it was safe to test out new songs when not that many people were watching. That’s the true test. “Stop Motion” seems to be a new crowd favorite. Which is good, because it’s one of my favorites to play.
(Check out “Stop Motion” here: .)