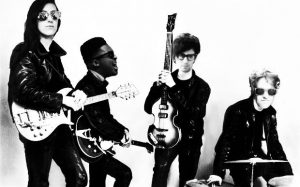 Del Venicci released Haunted Hall on February 25 via Prima Satisfaction.  The brainchild of Grace Bellury (Lille), Ross Politi (Carnivores), Jonathan Merenivitch (Janelle Monae, Dog Bite, Bosco) and Tyler Waters (The Clap) the band is an amalgam of Italian dream pop and art rock that is equal parts thoughtful and satisfying. Fans of Broadcast, Cocteau Twins and My Bloody Valentine take note; this is a lush, dreamy and deeply addictive record.
Both Ross and Grace are grandchildren of Italian opera singers, and speak often to how this influenced the retro-Italian aesthetic they’re after. Politi’s father (who is first generation Italo-American) grew up singing doo-wop on street corners in the Italian neighborhoods of Brooklyn during the 1950’s. Politi’s father would also go on to perform professionally with certain incarnations of acts such as the Del Vikings, Chaperones, and Mello Kings. According to family lore, Bellury’s great grandfather was involved with the mafia and forced to flee Italy after things turned sour.
Ghettoblaster recently caught up with Bellury to discuss the record.  This is what she said about it.
When did you begin writing the material for Haunted Hall?
A little over a year ago. I had a collection of songs and one song really stood out to Ross Politi.  He offered to produce the track and add drums and guitar over my core tracks. It’s also one of the two tracks on the EP that doesn’t have bass guitar. We named the new rendition of the song “Haunted Hall” and decided to collaborate on more tracks leading up to the creation of the band.
What was the most difficult song to take from the initial writing stage through recording and mixing?  Why was it so troublesome?
“Speaking to Snakes” was a difficult task because of the simplicity of the song. We added a lot of intricacies and bells and whistles during the recording stages to jazz it up, and the result was a bit chaotic. I think the process of building up a lot of layers and then stripping it back down totally freshened the song for us and clarified how it was really supposed to sound.
Which of the songs on the record is most different from your original concept for the song?
“Jungle Arms” was a bare bones frame of a song I wrote based on a dream of being enclosed in a white room where silence is deafeningly loud. Ross played with it structurally for weeks and turned a very raw melody into a droning odyssey. Mid mixing he flipped the drums track backwards. There are a lot of sophisticated touches like that in the song that he worked on for a while.
Did you have any guest musicians play or sing on the record?
Nirvana Kelly from Little Tybee added violin and viola on “Speaking to Snakes”.  Dan Wakefield from Ominous Castle/Lotus Plaza produced the song “Contagion” and added samples and keys, and Frankie Broyles of Deerhunter did a backup vocal part on “Contagion” as well.
Who engineered, mixed, mastered and produced the record?  What input did these people have that changed the face of the record?
Ross recorded five of the six tracks and Dan Wakefield recorded “Contagion”. Travis Thatcher (Judy Chicago) mastered the album. When we showed up at Dan’s place with “Contagion” it didn’t have a solid structure, and he really had a great sensibility when it came to finding the best sounds to draw out and piecemeal together. He’s very organized and meticulous which helped us so much conceptually. Ross’s recording style is definitely more old school, but the vintage production style he has suits us pretty perfectly, I think.
Is there an overarching concept behind your new album that ties the record together?
It’s part history and part fairy tale, or rather a marriage of the two. We’re so interested in our backgrounds and where we came from, but elaboration and story telling is a vastly important part of our art. Our imaginary pasts might be a good way to put it.
Have you begun playing these songs live and which songs have elicited the strongest reaction from your fans?
We have! “Contagion” seems to be the consensual favorite so far, but it really depends on the crowd. The audience is just as important as the performer.
(Check out the band here:
SoundCloud: Del Venicci – “Teenage Swingers”
MP3 Download: Del Venicci – “Teenage Swingers”
Video: Del Venicci – “Teenage Swingers” )