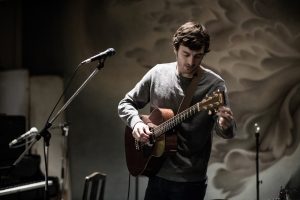 Invisible String is a collection of live recordings made by Gareth Dickson – best known as Vashti Bunyan’s main live accompanist (featured on two songs on her upcoming Heartleap album) on his solo odyssey around Europe in 2012. From the banks of the Bosphorus in Istanbul, to a rooftop in Paris overlooking the Sacre Couer, by way of a slightly less glamorous stairwell in Caen, this relentless travelling and performing allowed Gareth to hone his art to its summit, and resulted in a bewitching batch of live performances. Brought to you here, to move your soul in the comfort of your own little kingdom. Invisible String was released August 26 on Sleeping Man Records.
Working with many pioneering musicians from this generation and previous ones – including Devendra Banhart, Coco Rosie, David Byrne, Max Richter and Joe Boyd (producer of Nick Drake, The Incredible String Band, etc. — in addition to his solo output Dickson has recorded and toured extensively worldwide at the invitation of cult legends Bunyan and Juana Molina (being the only musician other than Juana herself to contribute to her album Un Dia).

Ghettoblaster recently caught up with Dickson to discuss the effort. This is what he told us.
When did you begin writing the material that appears on your live album?
The earliest track which appears here is “Harmonics”, I wrote this as early as 1997/98. I released it properly on my Collected Recordings album from 2009 and still occasionally play it live. It’s probably the oldest track I have which I still play from time to time.
What was the most difficult song to play live?  Why was it so troublesome?
The most difficult track for me to play is “Nunca Jamas,” it’s a cover of an Argentinian folk song which I learned while I was living there for a few years. My own songs are comfortable for me to play because I write them according to my technique I guess, playing someone else’s song involves playing to their strengths rather than your own. In this case the left hand has to move pretty fast and that’s not normally a feature of my own work.
Which of the songs on the record is most different from your original concept for the song?
I think possibly “Like a Clock.” This one also appears on Collected Recordings, but as a slow, and very low-fi, recording. On the new live album the sound is much clearer and I play it a lot faster, and in a more upbeat way overall than the original version.
Did you have any guest musicians play or sing on the record?
No, I always record completely alone, whether live or in the studio.
Who produced the record?
There was no real producer in this case, it was however mastered by Taylor Deupree who improved the sound of the original recordings I sent him no end. He has now mastered all of my material, including my old albums for reissue on vinyl. Mastering is a whole other art form and I’m extremely lucky to have been able to work with Taylor on my recordings.
Is there an overarching concept behind the way you put the record together?
In this case no, it’s simply a collection of what I feel are my strongest works, taken from a very busy year of touring in 2012, selecting what I considered to be the best performances of all of the material I had recorded.
This is a live album so you’ve already tested the material on an audience, which songs have elicited the strongest reaction from your fans?
From the more recent songs “This is The Kiss” usually has the strongest reaction, both in terms of applause and people’s comments. Of my older material it would probably be “Two Trains.”
(Visit Dickson here: www.garethdickson.co.uk and www.facebook.com/garethdicksonmusic.)