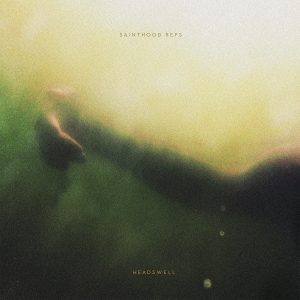 Sainthood Reps got their start in Long Island in 2009 and currently feature Francesco Montesanto on guitar/vocals, Derrick Sherman on guitar and Bradley Cordaro on drums. Influenced by bands like Nirvana, Sunny Day Real Estate, My Bloody Valentine, Mogwai and Built to Spill, the band blends an eclectic mix of indie rock, post-rock, post-hardcore and alternative rock, creating a unique, brooding sound that grabs hold of listeners attention with each riff and verse.
The band released their debut album, Monoculture, in 2011, which found them further tapping into their influences of ’90s alternative and emo and transitioning from a instrumental post-rock band to the loud passionate rock band they were destined to become.
Ghettoblaster caught the bands explosive live show last year while they toured in support of Monoculture, and couldn’t wait to catch up with Montesanto to discuss Headwell, their sophomore effort that drops via No Sleep Records on October 22.  We’ve heard it and it is no sophomore slump; lush, distorted guitars and penetrating lyric…This is what Montesanto had to say about it.
When did you begin writing the material for your most recent album?
Pretty much immediately after we finished recording our first record, Monoculture.  Writing is very organic for me.  It’s very difficult for me to decide that I’m going to just sit and write something without anything in mind already.
What was the most difficult song to take from the initial writing stage through recording and mixing?  Why was it so troublesome?
The main riff in the song “Rapture Addict” had been floating around for a while and saw many different incarnations.  Of all the songs to make the record, that was probably our least favorite as a band.  The original vision for that song was drastically different than the way it turned out.  It was, and still is, difficult to accept the final version of that song.
Which of the songs on the record is most different from your original concept for the song?
The aforementioned “Rapture Addict.”  I have probably five alternate sets of lyrics for this song which are all very different from one another.  There was a version that I just screamed a lot and it sounded like Grade.  Another version was very Sunny Day Real Estate.  The original concept was for it to be an instrumental song.
Did you have any guest musicians play or sing on the record?
Andrew Accardi (ROBBERS) may have contributed some percussion for “The Last Place I Left You.”  He was definitely banging things in the live room with the mics running, although I’m not sure if any of it made the final cut.  We definitely had people in mind for extra vocal stuff, but it just wasn’t feasible to explore any of those possibilities.
Who produced the record?  What input did that person have that changed the face of the record?
Mike Sapone produced the lot of it.  He is pretty much a big kid with an incredible imagination.  There’s no curtailing his enthusiasm or his creativity and he is largely responsible for what we sound like as a band.  Monoculture was definitely Mike flexing his creative muscle and he was definitely more in his element for that record.  With Headswell, we wanted a more organic sounding record, which was challenging for both of us.
Is there an overarching concept behind your new album that ties the record together?
There is definitely a theme of mourning throughout the record.  This record is much more personal lyrically than our first record.  A lot of the lyrics were written at a pretty rough point in all of our lives.  They reflect on how much more sense our lives used to make, but also how we’re moving forward as individuals and coming out happier and stronger than before.
Have you begun playing these songs live and which songs have elicited the strongest reaction from your fans?
We’ve played four new songs from the record, beginning as early as a year ago.  New songs, especially when they’re unreleased, are difficult to gage the reaction of the crowd.  We just watched Title Fight play the other night.  When they played “27” it looked like the room was going to explode, but when they played one of their new songs “Be A Toy,” the crowd just kind of politely, lightly banged their collective heads.  I will say, though, the reception we’ve received from people who recognize the new material has been overwhelmingly positive and we can’t wait to continue playing these new songs live.
(See the band play the songs live here:
Oct 24 – Brooklyn, NY – Knitting Factory (w/I Am The Avalanche)
Oct 25 – Philadelphia, PA – The Barbary (w/I Am The Avalanche)
Oct 30 – Ybor City, FL – PRE-FEST
Nov 1 – Gainesville, FL – THE FEST
Nov 2 – Atlanta, GA – Masquerade (w/I Am The Avalanche
Nov 4 – Asbury Park, NJ – Asbury Lanes (w/I Am The Avalanche)
Nov 5 – Norfolk, VA – Norva
Nov 6 – Baltimore, MD – Rams Head Live
Nov 8 – New York, NY – The Studio @ Webster Hall (w/Polar Bear Club)
Nov 9 – Baltimore, MD – Ottobar (w/Polar Bear Club)
Nov 10 – Cambridge, MA – The Sinclair (w/Polar Bear Club)
Nov 12 – Toronto, ON – Hard Luck (w/Polar Bear Club)
Nov 13 – Detroit, MI – Magic Stick (w/Polar Bear Club)
Nov 14 – Cleveland, OH – Grog Shop (w/Polar Bear Club)
Nov 15 – Chicago, IL – Subterranean (w/Polar Bear Club)
Nov 16 – Dekalb, IL – The House Cafe (w/Polar Bear Club)
Nov 18 – Denver, CO – Marquee Theatre (w/Polar Bear Club)
Nov 20 – Salt Lake CIty, UT – Kilby Court Gallery (w/Polar Bear Club)
Nov 21 – Boise, ID – The Shredder (w/Polar Bear Club)
Nov 22 – Seattle, WA – The Vera Project (w/Polar Bear Club)
Nov 23 – Vancouver, BC – Biltmore Cabaret (w/Polar Bear Club)
Nov 24 – Portland, OR – Branx (w/Polar Bear Club)
Nov 26 – Oakland, CA – Oakland Metro (w/Polar Bear Club)
Nov 27 – Anaheim, CA – Chain Reaction (w/Polar Bear Club)
Nov 29 – San Diego, CA – The Irenic (w/Polar Bear Club)
Dec 1 – Scottsdale, AZ – Pub Rock Live (w/Polar Bear Club)
Dec 3 – Dallas, TX – Sons of Hermann Hall (w/Polar Bear Club)
Dec 5 – Atlanta, GA – Drunken Unicorn (w/Polar Bear Club)
Dec 7 – Philadelphia, PA – F.U. Church (w/Polar Bear Club))