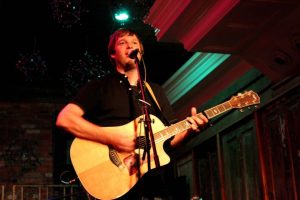 For Significant Trees, Mobile, Alabama, singer-songwriter Ferrill Gibbs delivers a pleasant sounding album that at times conjures Coldplay and at others, Fleetwood Mac. Though self-released, the disc includes engineers, producers and players who’ve graced the music of artists such as of Montreal, R.E.M., Sonic Youth, the Allman Brothers Band and Government Mule, among others.
Ghettoblaster recently caught up with Gibbs to discuss the record, which he dropped on August 12. This is what he said about it.
When did you begin writing the material for Significant Trees?
I wrote the first song for Significant Trees during my first solo album’s mixing stage. Spring of 2011. Two years later, I finished the last song for Significant Trees, “A Ghost Who’s Familiar,” the night before the final studio session.
What was the most difficult song to take from the initial writing stage through recording and mixing?  Why was it so troublesome?
“Turn the Cheek Love,” hands down. For many reasons, too. First, it’s difficult to play. It has so many parts. Also, it’s in open G tuning which I know nothing about. My dear friend and longtime guitar teacher suggested I play around with open G to spur creativity, so I ventured into it. The fret board lost all identifiable markers and each string led to random, unfamiliar notes; but in the darkness I emerged with the pretty progression that serves as the flesh of the song.
Once the song was complete, I took it to the studio and into the sound booth to play it acoustically for the band. Just to demonstrate. The band played quietly along with me. Turns out, this demonstration was the take we ended up using. Tom Lewis, the producer, liked it best, and he fought for it, so we kept it.
Mixing it was very difficult because the acoustic and vocals were recorded on one single mike, and since the acoustic is a large part of the song, it was tricky to get everything just right in the mix. But in the end, I think it turned out great. I am very proud of it.
Which of the songs on the LP is most different from your original concept for the song?
“Blitzkrieg” for sure, but in a good way. The band asked what I wanted out of it and I told them I wanted it to sound pretty, but also wanted it to kick like a B52 Bomber near the end. Originally the song was played on an acoustic in a strummy, sweet kind of way; but unlike “Turn The Cheek Love,” I wouldn’t play the acoustic with the band. This enabled them to escort me as they saw fit, not to be bound by my strummy guitar and to have the freedom to venture out and apply their own style to it. Immediately I could tell: the song would be darker than I originally planned. It would be far more blistering and even sinister at times, but that was good. It was what the story is all about.
What was it like working with Dan Nettles, Jojo Glidewell and Andy Carlson? Did they help with any of the arrangements?
They were great. True professionals, all of them. They put their stamp on all the songs but were also hyper-aware of what I wanted, careful to abide by that sort of thing. Dan’s a real leader. JoJo’s boisterous and pleasant and plays beautifully. Andy had perfect timing. He was incredibly sweet and is a professor of music in Ohio, actually. He had two of his students play on the album too: Adam Coon and Taylor Hallowell, both on cello. How cool is that?
Have you begun playing these songs live, and which songs have elicited the strongest reaction from your fans?
I play these songs live only in small settings because I’ve had such a unique experience with this particular band that I am reluctant to play them acoustically. I live so far from these guys and most of them are on constant tour: Robby and Marlon with Larkin Poe, JoJo with of Montreal, and Dan with Kenosha Kid. As for which songs have elicited the strongest reaction, I must admit: I’ve seen tears shed to both the songs “Wind In My Soul” and “Turn The Cheek Love”- on more than one occasion, too! But tears are good! I’ll take them.
(Visit him here: http://www.ferrillgibbs.com/.)