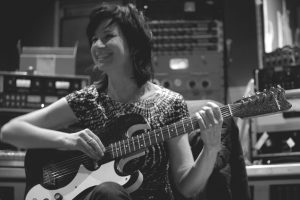 Singer/songwriter/actress extraordinaire Eszter Balint is set to release her long-overdue third album, Airless Midnight, on July 10. It was recorded in late 2014 and early 2015 in New York’s Brooklyn Recording and Richmond’s Montrose Recording, produced by JD Foster, and features masterful and provocative guitar work from Chris Cochrane, Marc Ribot, Dave Schramm, as well as distinctive vocal contributions from songstress Sam Phillips.
Eszter has been very busy for past few years. In 2014 she was making good progress writing material for the new album when out of the blue—after a long hiatus from acting—she was offered a part she couldn’t refuse. She agreed to be featured in a six-episode arc of Louis C.K.’s F/X series Louie, Season 4; her performance as his Hungarian girlfriend Amia earned her considerable critical praise. Eszter also improvised compositions, sang and played violin for the series. As soon as filming wrapped, Eszter returned to work on her album.
Airless Midnight boasts three of New York’s most distinguished and original guitarists: Chris Cochrane (John Zorn, Zena Parkins, long time EB alumni) Dave Schramm (The Schramms, Yo La Tengo, others) and Marc Ribot (too many to name!). They are joined by drummer Brian Wilson (Johnny Dowd, Neko Case), JD Foster on bass, and Sam Phillips on vocal harmonies. Andy Taub and Don Piper engineered at Brooklyn Recording, and Adrian Olsen mixed with JD and Eszter at Montrose Recording. This is her third album working with Cochrane, producer Foster, and Taub, and her second with Ribot, with whom she has also worked on many other projects over the years. Eszter is featured on vocals, guitar, violin, melodica, mandolin, random sounds, whistling, and wrote all the songs.
Ghettoblaster recently caught up with Balint to discuss the album and this is what she told us.