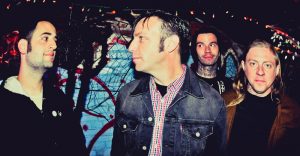 Tiny Empires, a new outfit from O Pioneers!!! founder/vocalist Eric Solomon and New Bruises’ guitarist and Kiss of Death label owner Bryon Lippincott, release their debut album, Weird Headspace, on April 15.
Alternative Press, in review of a split EP with Tigers Jaw and what would serve as Tiny Empire’s recording debut, described the young quintet’s music as “brash, dynamic and cathartic” with Solomon sounding “more vulnerable than he has in the past.”  Punk News said the band’s promising debut is “great punk rock with a strong hold on dynamics.”  The Houston/Tampa quintet is rounded out by Mickey Schmidt (guitar), Jason Winter (drums) and Christopher Murray (bass).
Ghettoblaster recently caught up with Solomon to discuss the record, and this is what he said about it.
When did you begin writing the material for Weird Headspace?
Tiny Empires started around the spring of 2011. O Pioneers!!! had just recorded a song for a split with Tigersjaw, and after we recorded it, we all kind of felt that song was different than anything that OP!!! had done. Although it was a natural progression to where the band was going, we kind of felt that maybe we should change it up a bit, and see if starting something new, would shake off any old preconceived notions. When OP!!! finished, we quickly started writing for the Tiny Empires Record, but with one of us in Texas, and everyone else in Florida, it delayed the writing process alot. Throughout the next year we worked on the record when we could all get together. I’d say by Oct of 2012, we had the majority of the songs for this record written, with the final piece being written days before went into the studio in Dec. 2012.
What was the most difficult song to take from the initial writing stage through recording and mixing?  Why was it so troublesome?
The last three songs of the record, were literally written two days before going into the studio. We had the idea, the layout, and the general vibe of what we wanted to do, but trying to piece together a 9 minute song with two days of practice was a little tricky. Which of the songs on Weird Headspace is most different from your original concept for the song?
One of the things I’m most proud of about this record, is every song that is on our first album is for the most part exactly how we envisioned them to be. There are definitely parts in each song that resonate a little bit more with me after they were recorded, but as a whole, we worked very hard on achieving a certain “mood” for the record, before we even went in to record it. I feel that we were very fortunate that everything came out the way the 5 of us imagined it would. I think it’s very rare, but also pretty awesome.
Did you have any guest musicians play or sing on the record?
On this record we did not. I’m hoping to convince Jeff Rosenstock and Laura Stevenson to be on the next one though. If their schedules allow it.
I think we are open to working with new musicians if they have anything that could be added to make a better song or record.  At the same time it was kind of important for this record to just be us, like an introduction
Who produced the record?  What input did that person have that changed the face of the record?
The record was produce by a friend (and soon to be Bryon’s nephew-in-law), Tyler Nicolo. He is sort of our secret to this record.  Tyler works with a lot of R&B and hip hop artists. He helps record and produce a ton of records in that genre in PA.
He has been surrounded around music since he was a kid as his dad ran RuffHouse Records.
Bryon had talked to him a bunch about helping us with our record, and he seemed pretty on board. I think having someone work on the record who was approaching the songs from a completely different angle than “this is a rock band, let’s make it all loud”, and focusing more on where the grooves in the songs are, help make each track stand stronger on their own.
Is there an overarching concept behind Weird Headspace that ties the record together?
Song writting was split by myself and Bryon. During writing and recording of this, I was going through a bad business relationship, Bryon was having some issues at home, and Jason, Mikey and Murray (as well as Bryon), were in and out not only their homes, but the country for work, that everyone just seemed a little strained. I think everyone kind of rallied around having a cool, part time outlet to work off the pangs of not being at home, or having weird stuff at home happening. I feel a lot of that is oddly reflected in the songs, not only the lyrics, but just the sort of downer feel throughout the record.
Have you begun to play any of these songs live and if so, how do they differ?
We’ve been playing these songs for about a year now. So far the biggest challenges have been having three guitar players. this makes it incredibly difficult to not just be mind blowingly loud. It’s super fun though.
(A pre-order for Weird Headspace is available now via Tiny Empires’ Bandcamp page: http://www.destroytinyempires.bandcamp.com.)