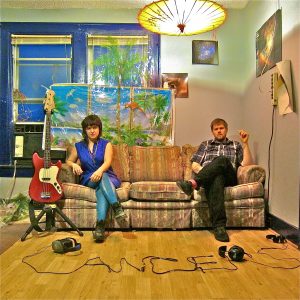 Cancers are an Athens, Georgia-based alternative love child born to Ella Kaspar and Lenny Miller by way of Vancouver, Canada and New York City. The two met while toiling away on tour with their respective previous bands, and joined together out of a desire to craft their own music free from compromise. The result consists of crushing melodies, dreamy pop girl vocals, and new alternative guitars.
While Cancers’ sound does evoke familiar grunge-era angst, Kaspar’s airy vocals, comparable to Beach House’s Victoria Legrand, distinguish the band from their predecessors, marrying vulnerability with sex. With their debut album Fatten the Leeches, out on Dead Broke Rekerds and Kandy Kane on September 6, the couple crawl hand-in-hand through anguish, alienation, despair and into the light.
Tired of being pigeon-holed in the lo-fi DIY of their past, the band enlisted Jack Endino to produce the album. Endino’s early work with Seattle heavy-weights like Nirvana, Hole, Babes in Toyland and Soundgarden, established him as a king of underground rock records, and has been referred to as “the godfather of grunge.” Fatten the Leeches delivers, resolving Cancer’s adolescent lust for distortion and riffs with a satisfying pop sheen.
Ghettoblaster recently caught up with the duo to discuss the record. This is what they told us.
When did you begin writing the material for your most recent album?
Ella Kaspar: Some of these songs I started about two years ago as my last band was disbanding.  I was trying to write songs with a different approach and to write and play more guitar instead of bass.  I have a lot of trouble starting the creative process, so it can take a long time for me to write enough material for an album. It sucks.
What was the most difficult song to take from the initial writing stage through recording and mixing? Why was it so troublesome?
EK: “Be Cool,” definitely.  This song went through so many different iterations.  It had three different versus at one point, and got played with different bands in different styles.  Then Lenny and I demoed it at home and through a cloud of smoke added more riffs and edited it all down to what it is now.
It was the first new song I wrote after my last band, so we were trying to find our sound or whatever.
Which of the songs on the record is most different from your original concept for the song?
EK: “Moral Net,” which Lenny wrote.
Lenny Miller: Yeah that song was originally recorded in Ella’s father’s living room in Manhattan during the winter of 2013. I had stopped writing songs for a couple months and wanted to change the approach of how I had been writing… Glad it popped out of me during a grey day in NYC.
Did you have any guest musicians play or sing on the record?
LM: But our live bassist, Luke Stackhouse, actually recorded on the new record because he is a straight solid player and nailed everything first take… Almost everything was first or second take on this record… EK: … Except my parts.
Who produced the record? What input did that person have that changed the face of the record?
EK: We recorded with Jack Endino.  Jack Endino had an influence on our sound before we even stepped into the studio because we grew up listening to his work. LM… Not even knowing that he was the guy behind it all. Also, I’m not sure if he even knew that. As much as he tried to steer away from the the whole ‘90s thing that we wanted, he put a modern flair on this record and that’s why he is and always will be one of the greatest rock producers/engineers in the ‘biz.’
Is there an overarching concept behind your new album that ties the record together?  EK: I dunno, I think that like for me it’s hard for me to not write a song that’s catchy and poppy but I was also going through a lot of depression when writing so I wanted it to be dark and… I dunno, just kinda of go back to the shit that I grew up on… LM: Yeah and like realize all the bullshit music and crap you hafta go through with stupid trends and stuff and just make a supremely honest guitar driven band.
Have you begun playing these songs live and which songs have elicited the strongest reaction from your fans?