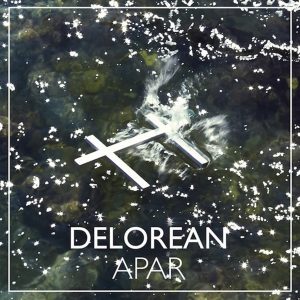 Delorean started the band as teenagers in the Basque Country town of Zarautz in Spain, informed by a love of hi-hat-frenzied dance music, then moved to Barcelona, where they fully embraced carefree Mediterranean club music on their celebrated 2010 LP, Subiza. After touring heavily in support of Subiza the band built their own studio in their adopted hometown of Barcelona – looking for a semblance of normalcy to record their follow-up, Apar (True Panther Sounds).
However, a failed relationship, a national financial crisis and an embrace of a more sophisticated relationship to sound recording and songwriting push the stories and dynamics of this album to a deeper more complex place. For Apar the band set on a musical journey to get to the core of their songwriting. Leaving behind the ornate and layered production of Subiza, the chopped up female vocal samples have been replaced by actual singers and the bare minimum of instrumentation is all that remains to support them. This measured approach that the band embraced for Apar is what waning relationships sometimes need in order to survive.  Amid turbulence, Delorean have bonded tight too, and with Apar the band has made the most powerful, dynamic, and moving album of their career.
Ghettoblaster recently caught up with vocalist and bassist Ekhi Lopetegi to discuss Apar.  This is what he told us.
When did you begin writing the material for your most recent album?
We started writing the new material in late 2011, we wanted to try new things after touring a lot with the Subiza album.
What was the most difficult song to take from the initial writing stage through recording and mixing?  Why was it so troublesome?
I think that we got  stuck  writing “Walk High”.  There are like 30 different versions that we get rid off while writing it and it took i while to finish it. The main reason until we found something we felt comfy was because we wanted the chorus to sound empty without losing punch and without putting the drum volume “in your face” and we wasted three months until we found something decent.
Which of the songs on the record is most different from your original concept for the song?
Maybe “Unhold”, the first version was all based on samples and pitched up female samples, that related more to the Subiza kind of production. So we replaced everything with real instruments and an actual female singer that ended up being Caroline Polachek from Chairlift.
Did you have any guest musicians play or sing on the record?
Yeah, Chris Zane played all the percussions and additional drums. Erika Spring provided back up vocals for seven tracks. Caroline Polachek is the main singer in “Unhold” and Cameron Mesirow provided back up vocals for “Destitute Time”.
Who produced the record?  What input did that person have that changed the face of the record?
Chris Zane produced the entire album. We met him a couple of years ago in one of our shows in NY. He showed us his studio and we already knew that we wanted to work there with him. His work has been crucial in terms of the sound we finally got, specially with drums and guitars.
Is there an overarching concept behind your new album that ties the record together?
The album cover, the title and the lyrics are related to the same concept.  Apar is a basque term for foam. We came up with the name when we saw the cover photo. The picture shows the two crosses being thrown into the ocean, and looking at the foam on it we just thought it all made sense. In one Apar refers to the inconsistency of things, whereas the two crosses affirm n unconditional commitment. We wanted to highlight that contrast as it relay ties the record together lyrically.
Have you begun playing these songs live and which songs have elicited the strongest reaction from your fans?
We started playing some of the material even before recording the album, and we realized that some of the new tracks sounded more powerful than the old ones because they are way more simple, so we decided to change the old ones and simplify them to get a more coherent live set. The reaction of the crowd is really good, specially with dominion