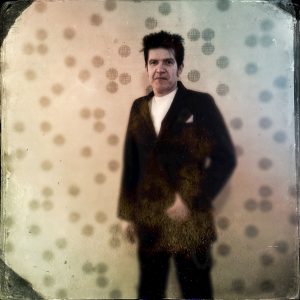 Kaye is the fifth solo album from UK-born, NYC-based singer-songwriter, Edward Rogers. Inspired and dedicated to the late English singer-songwriter and psychedelic legend Kevin Ayers (a founder member of Soft Machine), Kaye features 11 new Rogers originals and a version of Ayers’ “After The Show.”
Born in Birmingham, England where he spent his first 12 years of his life, Rogers moved to New York City just as the British Invasion began in the States. He started his career behind the drum kit and played in several garage bands. When a subway accident in October 1985 left him without his right arm and right leg below the knee, he turned to songwriting and found he found singing and writing more rewarding than playing drums. Over the past decade, Rogers has been extremely prolific, releasing four solo albums (two of which were co-written with George Usher) as well as two with Bedsit Poets, which Rogers founded, a Folk/Brit-inspired trio whose name was given to them by The Zombies’ Colin Blunstone. Rogers will be on tour with Colin Blunstone this Spring.
Ghettoblaster recently talked to Rogers about Kaye and this is what he said.
When did you begin writing the material for your most recent album?
I’m always writing songs, but at some point, you look at the collection you have written and find a link among certain songs and the body of work takes shape. In the case of Kaye, which is written about English singer-songwriter, Kevin Ayers, the title song was the anchor for the entire album. Ironically, it was the last song I actually wrote (early 2013) for the album.
What was the most difficult song to take from the initial writing stage through recording and mixing?  Why was it so troublesome?
“What Happened To The News Today” was the most challenging. Finding the right arrangement and making a statement about how news is being reported, without making it too political, was difficult, because I wanted the song to stand on its own.
Which of the songs on the record is most different from your original concept for the song?
Finally an easy question! Originally “Peter Pans Dream,” was written as a short pop song and ended up as a one-take 28-minute track which was edited to eight minutes for the actual album. There’s still talk about somehow releasing the 28-minute version down the road. People either love it or hate it!  I think it’s more of a ‘musician’s’ dream and not the original pop song I envisioned.
Did you have any guest musicians play or sing on the record?
I’m lucky to have some really good friends who also happen to be incredible musicians. On Kaye, James Mastro (Ian Hunter/Bongos, etc.) plays guitar as does Pete Kennedy (The Kennedys/Nanci Griffith) and Don Fleming (Velvet Monkeys) and my producer Don Piper (a don piper situation/Syd Straw). On bass is my mate Sal Maida (Roxy Music/Sparks/Cracker, etc.); on drums the man himself Dennis Diken (Smithereens/Dennis Diken with Bell Sound) and let’s not forget Joe McGinty on keyboards (Losers Lounge/Psychedelic Furs/Ramones/Ronnie Spector); along with Tish & Snooky (Manic Panic;Sic F*cks) on backing vocals; Gary Olson (Ladybug Transistor) is on trumpet.
Who produced the record?  What input did that person have that changed the face of the record?
Don Piper (see above answer) and I have worked together on several solo albums and projects (ie Bedsit Poets). His approach to making Kaye was to cut it live and have all the musicians play together in the studio, with very little overdubs. What ended up happening was the vocals were also mostly cut live in the studio. The main body of work took only five days to record.
Is there an overarching concept behind your new album that ties the record together?
All the songs have a link back to Kaye and to Kevin Ayers. It’s strange how one song can magically link all the songs together, even though they were written at different times, with no common theme originally in mind. I even decided to do a cover of Ayers’ “After The Show.”
Have you begun playing these songs live and which songs have elicited the strongest reaction from your fans?
Since I am going on tour with Colin Blunstone next month (May), we have been playing some of the new material live and found that “My Street,” “What Happened To The News Today” and “Kaye” seem to get the audience’s attention most.
(Visit Rogers here: http://www.edwardrogersmusic.com/
https://www.facebook.com/edward.rogers?fref=ts
https://www.facebook.com/pages/Edward-Rogers-Fan-Page/228624228865)