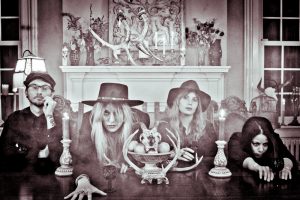 In the winter of 2010, Echo Wilcox approached Duane Lundy of Shangri-La Productions with a compilation of loosely established songs. At the time a student of photography and motion graphics at the Savannah College of Art and Design, Wilcox’s composition process was heavily informed by translating traditional visuals into conceptual soundscapes. Lundy, a long-time friend and collaborator, remained producer/engineer of the project as Wilcox fleshed out her original pieces into a wholly realized full-length album. Over the following few years, the studio became home and haven to the various permutations of Ancient Warfare.
Based in Lexington, Kentucky, with roots in both Savannah, Georgia and the California coast, Ancient Warfare are set to deliver their August 11, 2015 Alias Records release, The Pale Horse. Since 2011, they have developed a fierce reputation for hard work and dynamic performance, sharing stages with artists such as The Raveonettes, Richard Buckner, The War on Drugs, Chelsea Wolfe, Scout Niblett, Mr. Gnome, and Lucius. Ancient Warfare?s live show ebbs and flows from hushed harmony vocals to austere, tube-driven waves of sound.
Ghettoblaster recently caught up with Wilcox to discuss the record. This is what she told us.
When did you begin writing the material for The Pale Horse?
The first song I wrote for Ancient Warfare was “Wintertimes.” I started this tune back in late 2009. In December of 2010 I brought this track and three others into the studio with the initial thoughts of making a four-track EP. Of these four songs, “Wintertimes,” “Lickin’ Lies” and “Rolling Tides” were the ones that made the cut for The Pale Horse LP.
What was the most difficult song to take from the initial writing stage through recording and mixing? Why was it so troublesome?
The original “fourth” track, titled “Temporary Souls” (inevitably did not make the cut for the LP) was the most problematic. This particular track was a tough one because we as a band, performed it live very differently, than what was initially laid down. The record was made during a transitional / growing stage of Ancient Warfare and we had yet to establish our lineup until the middle of the recording process.
Which of the songs on the record is most different from your original concept for the song?
“Dreamcatcher” is definitely the track that manifested the most. Even the name itself (originally called “Dreamcatcher Bull”) underwent changes. Sometime during the session, we were asked to do a Shaker Steps Video which typically is of bands doing a more stripped down performance. It was at that time, the song took a very different direction. I believe it was Emily who came up with the idea to approach the song in a more minimal way for the video. She brought a very percussive, raw and tribal like drum part to the table and with that, the rest of the song basically re-evolved. We all had to rethink our parts while still keeping the song somewhat intact from its original sound. This version ended up being our favorite so we decided to adjust accordingly in the studio. Needless to say there was plenty of re-tracking to be had for this one.
Did you have any guest musicians play or sing on the record?
There were several. As I mentioned earlier, the band was basically born while The Pale Horse was in the midst of being recorded. I moved to Lexington to find the rest of the band members and complete what was already started in the studio. The first three tracks recorded were performed by studio “guest musicians’’ and myself. These talented folks included; Justin Craig (electric guitar, bass, atmospheric sounds), Tom Hnatow (pedal steel, organ/piano, electric guitar), and Robby Cosenza (drums), Blake Cox and Clifton Meyer each played bass on a track and both Reva Russell-English and Eric Smith on backing vocals. This was definitely a collaboration project that grew and morphed into what is a very rich and dense record. We really lucked out having ALL of these amazing people involved.
Who produced the record? What input did that person have that changed the face of the record?
Duane Lundy was the producer/mixer/engineer for The Pale Horse. He has a very organic approach with emphasis on the color and textural elements, which translates throughout the the record. There’s this unique way that Duane works with the artists as a whole – pushing the envelope to its fullest and really getting at some creative core. The album beholds this sort of glow, so to speak, that’s influenced by Lundy’s visual accents.
Is there an overarching concept behind your new album that ties the record together?
In short, it’s a record conceptually wrapped around the idea of the life-death-life cycle that we all experience and with that comes apocalypse and revelation in both an intimate and vast sense.
Have you begun playing these songs live and which songs have elicited the strongest reaction from your fans?
Yes, most definitely. We have been playing these tunes and are continuously re-arranging and writing new ones as well. “Killa Man,” which is a delicate waltzy song filled with tons of harmonies, seems to resonate with folks quite a bit. “Gunsmoke,” which is our first single off the record, really grabs the audience’s attention too. On the other spectrum, we have some new material that we’ve started incorporating into the set and has received a pretty solid response. This really excites us. The new songs are leaning in a bit more raw chunky direction and has been really fun writing and working these out as a band.
(Visit Ancient Warfare here: http://www.ancientwarfaresound.com/.)