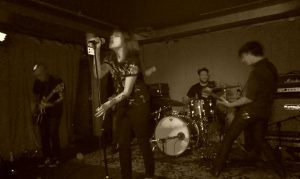 Following their split seven-inch with LA’s Aeges released last October, Dust Moth now releases their debut EP, Dragon Mouth. A dense, layered genre-defying statement in six distinct movements. The band is comprised of current & former members of such influential bands as These Arms Are Snakes, Minus The Bear, Undertow, Aeges and XVIII Individual Eyes.
Taking the sound hinted at on their debut single “Toto,” the band has upped the ante for themselves across the board. The songs are deceptively heavy while simultaneously lush with atmosphere, as Irene Barbaric’s haunting croon floats effortlessly above it all. The album spans the emotional spectrum with some moments feeling unbearably morose and others feeling utterly triumphant. Few debut EPs sound this confident, this direct, or this special.
Dragon Mouth was produced, recorded, and mixed by Matt Bayles, who is also a full time member of the band (keys). His resume is no secret, and includes legendary bands such as Isis, Mastodon, Botch, Pearl Jam, Soundgarden and many more. It was then sent off to be mastered by Chris Common (Palms, Pelican, The Sword). The album will be released on March 25th via The Mylene Sheath.
Ghettoblaster recently caught up with all the members of Dust Moth to discuss the EP.  This is what they said.
When did you begin writing the material for Dragon Mouth?
Mark: The band really came together in early 2013. As we began, we had no plans to write for a record. We just wanted to build a good set to play live that represented what we were writing in our practice space. Over the last year we’ve been in the studio three times and Dragon Mouth has songs from all three sessions. We feel like it really represents what we are up to!
What was the most difficult song to take from the initial writing stage through recording and production? Why was it so troublesome?
Ryan: I’d say “Casual Friends” has come the farthest from its initial stage. There was a loose idea in the beginning and then it seemed to lose its luster in a way. We kept at it changing the arrangement here and there and then the more subtle nuances started to come out. Once we became more familiar with the song and the direction it seemed to be heading, what seemed like a more guitar-based song started taking shape to melodies and textures that became more of a focal point than just what Mark and I were doing. I was definitely more surprised with the end result of that song than any other one on the EP. In a great way.

Which of the songs on the record is most different from your original concept for the song?
Mark: All of them and none of them. It usually starts out with me, Ryan, and Andy just jamming. The only songs that started out with a “feel” were “Selector” and “Cusp”. As a band we do a good job of layering. When Matt adds keys and Steve adds his bass and Irene puts her touch too it, it takes on a new life. It’s a lot of fun. Everybody puts their own touch on our songs. It’s exciting because as the new layers come in, we as individuals get to revisit our own parts and build off of the new riffs.
Did you have any guest musicians play or sing on the record?
Mark: We had Jason Craig playing bass for us originally. He was in Sparkmarker and also fills in sometimes on guitar for Narrows. Then we had Jacob Hoffman on bass and he is in Ships and Transmissionary. Now we have Steve Becker on bass and he is also in Giza. They are all special to us.

Dragon Mouth was recorded and mixed by Matt.  Was it difficult to wear both the artist hat and be behind the boards, or was it the natural path towards the finish product the band wanted?
Matt: I did it in Minus the Bear, so it didn’t feel weird for me. We had done some studio demos and had prior rough mixes of the songs, so by the time we got to finishing the EP I think we were all on the same page. Plus I have worked with everyone in their other bands so we had that familiarity as well.
Is there an overarching concept behind Dragon Mouth that ties the record together?
Irene: This is our first song writing adventure together, so I think the record is naturally trying to set the stage for what’s to come. Lyrically there is a lot of high level scene painting with glimpses of unknown places and mysterious characters. The mood overall is dark and intense, but there is always this sense that this is only the beginning. I think this mirrors what we’ve tried to accomplish with Dragon Mouth — build a foundation while leaving room for exploration going forward.
Have you begun playing these songs live and which songs have elicited the strongest reaction from your fans?
Ryan: We’ve played all of these songs, yes. We have had a different mix of “Selector”  that we did a video for to get a little something of us out there so people could hear what we were up to. So that song elicits a bit of a response for sure but we’ve been getting a good response for the rest of them as well. As expected “Months” can be quite confusing. We wrote it and are still confused. But yeah “Cusp” and “Casual Friends” also get their share of hoots and hollas.
(Visit Dust Moth here:
facebook.com/dustmothband
dustmoth.bandcamp.com
www.mylenesheath.com)

Tags: ÆGES, Dust Moth, Minus the Bear, These Arms Are Snakes, Undertow