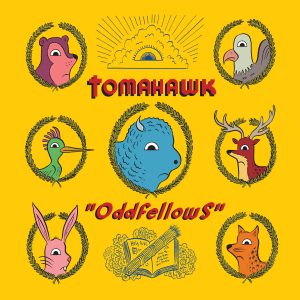 Tomahawk took a break to discover the many truths of the universe. They also uncovered several non truths. They were primarily holed up in a special place similar to the many caves in the mountains of Appalachia. They found time to create the new tunes that make up their new record Oddfellows that will be released worldwide in January 2013 on Ipecac Recordings.

This is not a reunion….unless that means they will make more money.

It was Ghettoblaster’s absolute pleasure to catch up with Tomahawk’s Duane Denison to ask him some questions about Oddfellows.  He also answered questions for a full-length feature in the next ish of the mag.  Keep an eye peeled for that.  But, read this first to whet your appetite…
When did you begin writing the material for Oddfellows?
I guess I started accumulating ideas–sketches, riffs and beats, etc–around 2009 or so, while I was doing a reunion tour with my old band The Jesus Lizard. I saw Patton and Stanier on that trip and chatted about possibly doing another album sometime soon. They seemed receptive to the idea so I started making home demos of some basic tunes.
What was the most difficult song to take from the initial writing stage through recording and mixing?  Why was it so troublesome?
I think “Chokeneck” was the hardest work. There’s lots of little things going on, backup vocals, keyboards, etc all competing for space in some spots….plus it’s got a bluesy/ blues rock feel, which is an easy thing to get wrong. I’m not sure we nailed it or not–you decide!
Which of the songs on the record is most different from your original concept for the song?
The third song “I.O.U.” came out way different—my demos were very minimalist, and the final version seems like a circus maximus rendition! But I like it, don’t get me wrong–it builds up and lets go in a way that it didn’t in early versions.
How was working at Easy Eye Studios?  Do you feel the studio had an effect on the record’s outcome?
I think we all loved Easy Eye. It’s a great studio, a nice mix of vintage and modern, and the house engineer (Collin Dupuis) is a charming fellow. We were able to do basic tracks live, all in one room, which to my ears gives a different kind of energy to the material–more immediate, more exciting, more, well, “live” sounding.
Is there an overarching concept behind Oddfellows that ties the record together?
I don’t think there’s any overarching concept, at least not anything we deliberately went for. There is an element of ambiguity, though–like, who are these Oddfellows? Is it us? Is it you? And throughout the album, there’s lyrical bits that could be interpreted in different ways–like in the title song the question ‘who judges you tomorrow?’ is asked, or in “Black Hats/White Hats” is it about immigration? And in “Southpaw” is the line ‘you rub me so wrong’ to be taken literally? “I.O.U” seems like a love song, or is it a prison song? That kind of thing….
With Tomahawk having recently begun playing live again after a really lengthy period, how has it felt to return to the older songs and how has the response been to the new songs?
It feels great to play the old songs–like shaking hands with an old friend….or wrestling with an old lady!  No, actually it’s been a pleasant surprise how well that mini tour went. We only played a few new songs–you can’t really expect much response when people don’t have the album yet! It doesn’t seem to work. But nobody shot at us so I think we came out ahead.
(Catch the band at one of these forthcoming live dates:
February 12    Seattle, WA    The Showbox
February 13    Portland, OR    Wonder Ballroom
February 15    San Francisco, CA    Great American Music Hall
February 16    San Francisco, CA    Great American Music Hall
February 17    Santa Ana, CA    The Observatory
February 19    Los Angeles, CA   The Mayan)