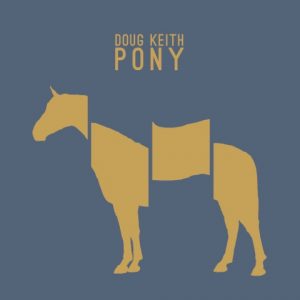 Douglas Keith is usually known as Sharon Van Etten’s right hand man and guitarist. However, when he’s not slinging for Van Etten Keith is an accomplished solo artist and modern day troubadour. He is set to release his new LP, Pony, February 11 on The Village Label. Spin recently premiered the first single from the album, ‘Pure Gold In The 70’s‘. It features the one and only J Mascis on an unmistakeable guitar solo.

Ghettoblaster recently caught up with Keith to discuss the forthcoming record.  This is what he said about it.
When did you begin writing the material for your most recent album?
I started writing this record in 2011. I wrote probably 20 songs for it, but then after demo’ing them like crazy at home, edited that down to the 10 we recorded for the record and then cut one that didn’t fit the sequencing quite right.
What was the most difficult song to take from the initial writing stage through recording and mixing?  Why was it so troublesome?
Hmm, I suppose “Pure Gold in the 70s” because my initial demo was really sparse and minimal. I knew I wanted it to have a huge release at the end, but wasn’t totally sure how to get there when we went into the studio so we worked on it quite a bit. Then with mixing, there were a lot of elements that I wanted to have in there without overdoing them and the connecting point between the beginning’s minimalism and the ending’s blown out explosion of sound needed to be just right in order to work. To connect those two points took a lot of focus and time. Jon Ashley (the engineer on the record) was instrumental in making that part work.
Which of the songs on the record is most different from your original concept for the song?
The song called “Black Metal Black” changed from a pretty dark kind of new- wavey song in my mind into a kind of classic rocker while recording. This change was suggested by Brad Cook and Zeke Hutchins who recorded the record with me. It came together really fast in the new shape and was so fun to play, almost like it was the house it should have been in the whole time.
Did you have any guest musicians play or sing on the record?
Everyone who played on the record was a special guest in my opinion. When I decided to record, I set out to get exactly the band that I got. I think the world of everyone involved in the record and am honored that they were into working with me.  Brad and Phil Cook of Megafaun were top of my list to make a record with, I’d felt that since I first met them a few years before. Their musical ability and feel and overall vibe are second to none, beautiful people.
Zeke Hutchins is my favorite drummer. I love playing music with him. His instincts and touch on the drums are absolutely perfect in my opinion. He’s also probably the nicest person I have ever met in my life.
Jon Ashley engineered the record and we mixed it together, but on top of his ridiculously amazing skills in the studio, he’s also an awesome drummer in his own right as well as being able to dial in synth sounds perfectly. He did some drum overdubbing and played some synth on the record, both of which fully made the songs he played on. I met Jon the first day of tracking and he couldn’t be a better guy, super chill and relaxed and such a hard working person. His focus is awesome. Record with him if you get the chance.
Heather Woods Broderick is one of my favorite human beings, period. I think the world of her approach to music. She likes to kick around the fringes in a really cool, unique way and on top of that, she’s so skilled at music that she finds these amazing out of the box ideas. Check out her records, they’re beautiful.
Adam Granduciel is the man of one of my favorite bands, The War on Drugs. When we changed that song “Black Metal Black” I immediately thought of his guitar playing for the song. He’s got this slinky-ness to his playing that is so unique to him. You hear it and you know it’s him playing which is so rare. He’s such a great player and beautiful soul.
J Mascis is one of my favorite guitar players and songwriters of all time. His records changed my life. He played the solo on the song “Pure Gold in the 70s”. When I was recording that song, I realized I was basically trying to emulate a J Mascis solo when we were trying to do the end and I couldn’t make it work. I had met J earlier in the year and he couldn’t be nicer. I emailed him the track and asked him if he’d be into doing a solo on it and to my jaw dropping amazement he said yes. His solo absolutely nails the feel I was hoping for. I can’t thank him enough for playing on the record, I’m humbled by his kindness.
Who produced the record?  What input did that person have that changed the face of the record??
I produced the record. I had mapped things out fairly well during the demo’ing process so there was a good path to follow. That said, the group at the initial recording sessions (Brad and Phil, Zeke and Jon) all threw ideas in that fully made this record what it is.
Is there an overarching concept behind your new album that ties the record together??
Yes. The record is really personal for me and touches on a lot of things from my past that I wanted to revisit and hopefully deal with. I can’t really say more than that.
Have you begun playing these songs live and which songs have elicited the strongest reaction from your fans?
I’ve only done a very small handful of shows in NYC to see how the songs would work live and in different contexts (as a band, solo, etc). I will say that I haven’t thrown down all the way yet with these songs so too early to say. I’m looking forward to playing them live in the new year.
(Visit Doug Keith here: https://www.facebook.com/pages/Doug-Keith/7479080769.)