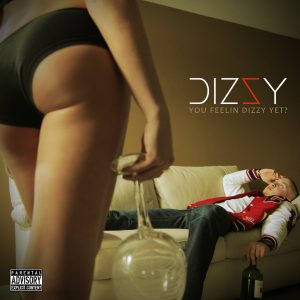 You Feelin Dizzy Yet?

Based off the strength of his first solo EP, G5 Dreams, Canadian hip hop artist Dizzy quickly became the go-to local support, landing several opening spots for major-label artists performing in Edmonton including Juvenile, Joe Budden, M.I.M.S, D12, Common, Bone Thugs N Harmony, MGK, E40, and more.??After releasing two videos off G5 Dreams, Dizzy immediately started working on his first solo mixtape In The Meantime. After dropping In The Meantime, along came the Bone Thugs N Harmony tour that took Dizzy and his sound from one coast to the other.
Inspired by all that was going on with his music, he began laying the groundwork for what would become his first full-length album You Feelin Dizzy Yet?. He acquired talents such as Ace Hood, Krayzie Bone, and Kevin Cossom to assist with the singles off of the project.??
With the album complete (and ready for its April 23 drop), the first single coming out on the next DJ Noize mixtape, and a list of possible tours coming up, 2013 is poised to be a big year for Dizzy.
Ghettoblaster caught up with Dizzy as he prepared for a spring tour with Dogg Pound (Kurupt and Daz Dillinger) in support of the record to discuss You Feelin Dizzy Yet?  This is what he said about it…
When did you begin writing the material for your most recent album?
I began working on U Feelin Dizzy Yet? as an actual album about eight months ago. However, some of the songs with the higher profile features were completed months before that even came about.
What was the most difficult song to take from the initial writing stage through recording and mixing?  Why was it so troublesome?
I’d say the song that gave me the most trouble was “Go Dizzy” which features the very gifted Kayla Coburn. The beat itself has a very strong pop feel to it but I didn’t want the track to come across as just another cheesy pop track. It took a bit of work but I like how it turned out; single material fa sho.
Which of the songs on the record is most different from your original concept for the song?

That would have to be “Bout It” featuring my dude Cursive. Originally I wanted the hook to be soft and contrast the grimier verses but we ended up having to give the hook a more rough edge too it so that it didn’t seem too out of place in comparison to the verses. Probably one of my favorite tracks on the album now.
Did you have any other guest musicians perform on the record?
This album is like a Lambo, it comes with all kinds of features. The album has features from Edmonton (Jaide, Habe, Sonik, K Blitz, Cursive, and Peep Game), my boy Terell Safadi from out west in Vancouver, and then of course the major label talents of Ace Hood, Kevin Cossom, and Krayzie Bone.
Who produced the record?  What input did that person have that changed the face of the record?
I took it to the net for this one. I brought on producers from all over to make this album happen, lots of different vibes and energies to make every track sound unique. The albums executive producers, however, were myself and the very talented Sonik from Edmonton.
Is there an overarching concept behind your new album that ties the record together?
Well, all the songs written were drawn up from past experiences of mine; the ups and downs I’ve gone through on this road I’m on. So I guess the underlying theme on this album is life. I don’t believe that I’m any different than the average Joe, so when I write a track about something I feel or that I’ve gone through, I know there’s a whole bunch of people out there that can relate to having to deal with the same issues or emotions. Hence “U Feelin Dizzy Yet?”
Have you begun performing these songs live and which songs have elicited the strongest reaction from your fans?
Yeah I’ve started to incorporate the songs off the album into my live sets. To date, the song that gets the biggest reaction is the Ace Hood feature “Am I”. I’ve got a couple that I’ve never performed before, though, that I’m planning on bringing out with me on tour this May when I go across Canada with Dogg Pound (Kurupt and Daz Dillinger). We’ll see what gets the biggest reaction then.