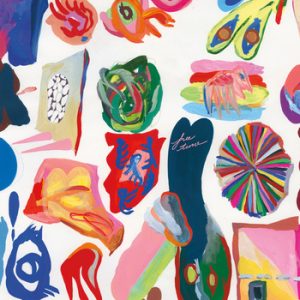 Free Time released their jangly, pop-centric debut album via Underwater Peoples on May 28. Formed in the summer of 2012 around Melbourne luminary songwriter Dion Nania (Panel of Judges). Nania’s songs tell stories of following love across the world, of being unsure about the future and of his place in it. Like the trans-Pacific ping pong of the last two years of his life, his songs veer between sweet sadness and wild exuberance.
After moving to New York in 2011, Nania kicked around for a while, played some lead guitar with fellow Melbourne transplants, Scott and Charlene’s Wedding, then helped out the Twerps, playing bass on a national tour. Shortly thereafter, he began writing new songs with the intent of putting a new band together, eventually enlisting the support of Adrienne Humblet on bass, Jonah Maurer on guitar, and Michael Mimoun on drums. Filling out Nania’s sometimes heartbreaking pop, the band quickly recorded most of their first LP the day before Dion flew home to mix it. He returned with fragments for new songs and the band finished the record in December 2012.
Ghettoblaster caught up with Nania, while he celebrated the album’s release and prepared for the record to drop on vinyl June 11. This is what he said about it.
When did you begin writing the material for your most recent LP?
I’d say I pretty much began when I first got to NYC summer 2011, though there was no band in mind to write for… Around that time I bought a loop pedal which helped… but things didn’t really come together til the band formed summer 2012

What was the most difficult song to take from the initial writing stage through recording and mixing?  Why was it so troublesome?
Oh it was all kind of a breeze really!

Which of the songs on the record is most different from your original concept for the song?
That would have to be “here + there.” on that one, I ended up taking out all the guitars from the part where I sing and throwing down a little piano in that part.  I was away from the band back in Australia at the time. I’d never really considered tweaking it that way, but it wasn’t working and I think that made it work.
Did you have any guest musicians play or sing on the record?
Julia from Twerps sings at the end of “here + there” and Marty does a little acoustic on that one, Nora Stillman does some vocals on “It’s Alright” and with Adrienne on “I lost Again.” Julie Burleigh plays recorder on “World Without Love.”

Who produced the record?  What input did that person have that changed the face of the record?
I don’t know about a producer title for any one person for this record, Jarvis Taveniere tracked all the band stuff, and Jack Farley tracked a little bit and I mixed a few with him, the rest with Jarvis, they both did a great job, but I guess ultimately the band drove the mixing and the remixing.  But those guys were great with time and being keen, two super important things, especially for a band starting out that no-one has heard of.

Is there an overarching concept behind your new album that ties the record together?
Well I’d say a few of them relate to some trouble in paradise that I had and how that played out.  And the whole Melbourne – New York thing I’d been doing which all tied in.  Unified Europe is my contribution to what I hope will be a growing canon of indie interpretations/reworkings of Gogol’s “diary of a madman.”
Have you begun playing these songs live and which songs have elicited the strongest reaction from your fans?
A little bit. “nothin but nice” maybe goes better than some. I think we’ll get a better sense of that once this tour gets rolling.
(ALBUM STREAM: Free Time – s/t –
http://pitchfork.com/advance/112-free-time/
VIDEO: Free Time – “I Lost Again” (Dir. by Charles Poekel & Maia Stern) –
http://vimeo.com/64525502
Catch up with Free Energy at one of the following dates:
06/09 Philadelphia, PA – Johnny Brenda’s
06/10 Pittsburgh, PA – Garfield Artworks
06/11 Detroit, MI – Garden Bowl *
06/12 Chicago, IL – Empty Bottle
06/13 Cincinnati, OH – The Comet
06/14 Nashville, TN – The Basement
06/15 Oxford, MS – Lamar Lounge
06/16 Atlanta, GA – The Earl
06/17 Charleston, SC – The Royal American
06/18 Columbia, SC – Conundrum
06/20 Raleigh, NC – King’s Barcade +
06/21 Richmond, VA – Strange Matter
06/22 Washington, DC – Red Onion (Day show)
06/22 Baltimore, MD – Golden West
06/23 Brooklyn, NY – Shea Stadium
* = w/ Ketamines
+ = w/ Owen)