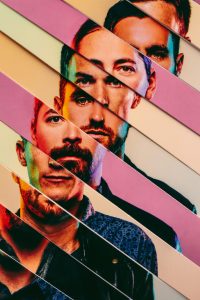 Combining the songwriting strengths of Alt-J and the production agility of Four Tet and Apparat, Mosaics are a San Francisco trio making music for the modern world in all its jittery, glittering glory. With unconventional guitar lines, overlapping samples, and intricate production, they marry artistry and accessibility to create a sound that comes across like an old friend after a long journey- transformed entirely, but warmly familiar. Having already received high praise from indie rock press and a commercial spotlight for Lumosity, they are quickly becoming recognized as a force to be reckoned with. Mosaics will self-release Of Colors on October 21 and Ghettoblaster caught up with guitarist/songwriter Devon Kelts to discuss the record and this is what he told us about it. When did you begin writing the material for Of Colors?   We began writing the material for Of Colors around July of 2013. What was the most difficult song to take from the initial writing stage through recording and mixing?  Why was it so troublesome? “Constant,” the first song we started on the record, took the longest for us to complete. It was a hodgepodge of good ideas that lacked any cohesion. We couldn’t arrive at a way for them to flow properly, but after months and months of hacking away, it came together. It has some of our favorite artistic moments on the record and we’re proud of what it ended up becoming. Which of the songs on the LP is most different from your original concept for the song? “Sinner.” What prompted the move to San Francisco? Is that where you thought your music would be best received? We moved to San Francisco because we loved the city and also felt that it was an atypical destination for a musician. We wanted to try something different and see what would result. Where did you find singer, Grady Lee? At one point, we all worked together at a southern restaurant. Grady displayed an intense passion for music and had similar tastes to us. When we needed a vocalist and found out he could sing well, it was a logical move. Have you begun playing these songs live and which songs have elicited the strongest reaction from your fans? We’re currently translating the album to live performance as quickly as possible! (Listen to a couple of the band’s songs here: NEW “Submit” via The Big Takeover MP3 Download / SoundCloud “Recursive” via Surviving The Golden Age WAV Download / SoundCloud)